As a cowardly farmer begins to fall for the mysterious new woman in town, he must put his new-found courage to the test when her husband, a notorious gun-slinger, announces his arrival.

A Million Ways to Die in the West is a 2014 American Western comedy film directed by Seth MacFarlane, who wrote the screenplay with Alec Sulkin and Wellesley Wild. The film features an ensemble cast including MacFarlane, Charlize Theron, Amanda Seyfried, Neil Patrick Harris, Giovanni Ribisi, Sarah Silverman, and Liam Neeson. The film follows a cowardly frontiersman who gains courage with the help of a female gunfighter and must use his newfound skills in a confrontation with her villainous outlaw husband.

Development for A Million Ways to Die in the West began while MacFarlane and co-writers Sulkin and Wild were watching western movies during the development of Ted. Casting was done between December 2012 and March 2013. Filming began on May 6, 2013, in various locations in New Mexico including Albuquerque and Santa Fe, and it concluded on August 9 that year. Joel McNeely composed the score.

The film was released on May 30, 2014, in the United States, and distributed worldwide by Universal Pictures. The film received mixed to negative reviews from critics, with criticism directed toward the film's length and MacFarlane's performance. The film was number three at the box office during its opening weekend and grossed over $87 million worldwide against a budget of $40 million. It was released on DVD and Blu-ray on October 7, 2014, and earned more than $15 million in home media sales.

In 1882, in the town of Old Stump, Arizona, timid sheep farmer Albert Stark (Seth MacFarlane) has broken up with his girlfriend Louise (Amanda Seyfried) as a result of his refusal to a gunfight. He prepares to migrate to San Francisco, believing that the frontier offers nothing for him. Meanwhile, infamous outlaw Clinch Leatherwood (Liam Neeson) robs and kills an old prospector (Matt Clark) for a gold nugget. He orders his right-hand man Lewis (Evan Jones) to escort his wife Anna (Charlize Theron) to Old Stump to lie low while he continues his banditry.

Lewis and Anna arrive in Old Stump under the disguise of two siblings intending to build a farm, but Lewis is arrested after shooting the Pastor's (John Aylward) son in a saloon. During the brawl, Albert saves Anna from being crushed by two of the patrons, and the two become close friends. They attend a county fair where Louise's new boyfriend, the arrogant Foy (Neil Patrick Harris), challenges Albert to a shooting contest. Albert is defeated, but Anna steps in and defeats Foy. Foy publicly humiliates Albert, who impulsively challenges Foy to a duel in a week's time to win back Louise. Anna then spends the week teaching Albert how to shoot.

During a barn dance the night before the duel, Anna gives Foy a Mickey. After leaving the dance, Albert and Anna kiss before heading home. Upon breaking out of jail and murdering the sheriff, Lewis observes the kiss and reports it to Clinch. On the day of the duel, Foy arrives late and goes into convulsions from the laxative he had unknowingly drunk. Albert, who has decided that Louise is not worth fighting for, once again forfeits the duel. He retires to the saloon, but Clinch arrives and demands to know who kissed his wife. He reveals that Anna is his wife and threatens to continue killing more people unless his wife's lover duels him at noon the next day. Later, Clinch confronts Anna by demanding that she reveal Albert's name. Before he attempts to have sex with her, she knocks him unconscious with a rock and escapes.

Anna returns to Albert's farm to warn him about Clinch, although he instead accuses her of lying to him the whole time. Clinch follows Anna to the farm; Albert helps her escape, then escapes himself. While fleeing, he is captured by a tribe of Apache Indians, who threaten to burn him alive. The Indians spare him when he reveals that he can speak their language. They give him a bowl of peyote, which sends him flashing back to his birth and through painful events of his childhood before making him realize that he loves Anna.

Meanwhile, Clinch recaptures Anna in town. Albert returns to Old Stump and confronts Clinch for a standoff. He wounds Clinch with a bullet poisoned with rattlesnake venom before his own gun is shot out of his hand, but he manages to stall until Clinch fatally succumbs to the poison. Louise attempts to win back Albert, but he rejects her and instead happily enters a relationship with Anna, who becomes his new wife. Albert also receives a bounty for killing Clinch and uses the money to buy more sheep.

In a pre-credits scene, the proprietor of a racist shooting game called "Runaway Slave" at the fair asks who would like to take a shot. Django (Jamie Foxx) steps up and shoots the man while commenting that "people die at the fair".

A Million Ways to Die in the West originated as an inside joke between MacFarlane and co-writers Sulkin and Wild,[14] while they were watching Hang 'Em High.[15] The joke evolved into "riffing on the idea of how dull, depressing, and dangerous it must have been to live in the Wild West."[14] MacFarlane, a lifelong fan of westerns, began researching the topic, using Jeff Guinn's nonfiction novel, The Last Gunfight: The Real Story of the Shootout at the O.K. Corral—And How It Changed the American West as an "invaluable resource," and basis for many of the ways of dying in the film.[14] Various aspects of the film were inspired by western films. The decision to make Albert a sheepherder was inspired by Montana (1950) and his average, non-confrontational demeanor by 3:10 to Yuma (1957).[16] Other westerns that inspired MacFarlane and the crew during writing included Oklahoma! (1955), The Man Who Shot Liberty Valance (1962), and El Dorado (1966).[16] The film was first announced on December 3, 2012, marking MacFarlane's second foray into live-action directing, after 2012's Ted.[17] Tippett Studio was hired to work on the film's visual effects.

Principal photography began on May 6, 2013.[26][27] Filming locations included various areas in and around Albuquerque, New Mexico,[28] also including the Santa Fe Studio in Santa Fe.[29] Principal photography ended on August 9, 2013.[30] The film shoot was difficult, as the cast and crew navigated rough weather: "everything from hailstorms to blistering heat to arctic winds and torrential rainstorms."[14]

The score was composed by Joel McNeely. The soundtrack was released by Back Lot Music on May 27, 2014.[31] The theme song "A Million Ways to Die" is performed by Alan Jackson. It was released as a single on April 29, 2014.[32] A portion of the Back to the Future theme by Alan Silvestri is used during Christopher Lloyd's cameo.[10] Near the end of the movie, the refrain of "Tarzan Boy" by Baltimora is used as a fictional "Muslim Death Chant."[33]

All music is composed by Joel McNeely, except as noted.

On May 16, 2014, the film had its world premiere at the Regency Village Theater in Los Angeles.[34][35] The film was later released nationwide on May 30, 2014.[36] The film was produced by Media Rights Capital, Fuzzy Door Productions, and Bluegrass Films and distributed by Universal Pictures.[37][38]

On January 27, 2014, MacFarlane announced that he wrote a companion novel based on the film's script, which was released on March 4, 2014.[39][40] An audio-book version was also made available, narrated by Jonathan Frakes.[41] MacFarlane wrote the book on weekends during shooting for the film, partially due to boredom.[14]

A Million Ways to Die in the West grossed $43.1 million in North America and $43.3 million in other territories, for a worldwide total of $86.4 million, against its $40 million budget.[3]

A Million Ways to Die in the West received mixed reviews from critics.[48][49] Review aggregation website Rotten Tomatoes gave the film a 33% rating based on 211 reviews, with an average score of 4.90/10. The site's consensus states, "While it offers a few laughs and boasts a talented cast, Seth MacFarlane's overlong, aimless A Million Ways to Die in the West is a disappointingly scattershot affair."[50] Another review aggregation website, Metacritic, gave a score of 44 out of 100, based on reviews from 43 critics, indicating "mixed or average reviews".[48] Audiences surveyed by CinemaScore gave the film an average grade of "B" on an A+ to F scale; opening weekend demographics were 55% male and 72% over 25 years of age.[51]

Claudia Puig's review in USA Today was largely positive, writing, "A Western with a contemporary sensibility and dialogue that sounds markedly modern, A Million Ways to Die in the West is quintessential MacFarlane, at once silly and witty, juvenile and clever."[52] Stephen Holden's review in The New York Times was mainly neutral, calling the film "a live-action spinoff of Family Guy, with different characters."[53] "While the whole thing feels weirdly miscalculated to me, A Million Ways to Die in the West tweaks the formula just enough, delivers a few laughs and keeps the guest stars coming," wrote Salon columnist Andrew O'Hehir.[54] Rafer Guzman of Newsday found the film amusing, calling it "another example of MacFarlane's ability to mix poop jokes with romance, foul language with sweet sentiment, offensive humor with boyish charm."[55]

Scott Mendelson of Forbes commended MacFarlane's decision to make an unconventional western comedy, but summarized the film as "just ambitious enough for that to be genuinely disappointing."[56] Michael O'Sullivan at The Washington Post was mixed, deeming the film a "broad, wildly hit-or-miss satire," remarking that he found few of the jokes in the film funny.[57] "Spiritually, it's closer to a mid-range crowd-pleaser such as City Slickers than Blazing Saddles, too enamoured of genre convention to reach for the comic dynamite," wrote Mike McCahill at The Guardian.[58]

Much of the film's criticism was directed towards its writing, running time, and MacFarlane's debut live-action performance. Michael Phillips of the Chicago Tribune criticized MacFarlane's acting and direction as: "A failure of craft. He can't direct action, or even handle scenery well. He can't set up a visual joke properly without resorting to head-butting and bone-crunching, and he doesn't know how, or when, to move his camera. He's not good enough as a romantic lead to anchor a picture."[59] Richard Corliss of Time called the film a "sagebrush comedy whose visual grandeur and appealing actors get polluted by some astonishingly lazy writing."[60] Scott Foundas of Variety found the film "overlong and uninspired," criticizing the film's "lazy writing," and MacFarlane's "surprisingly bland" comic performance.[61]

Rene Rodriguez of the Miami Herald gave the film one star, commenting, "There are enough laughs scattered throughout A Million Ways to Die in the West that while you're watching it, the movie seems like a passable comedy. By the time you get home, though, you can barely remember the jokes."[62] John DeFore of The Hollywood Reporter criticized the film's running time: "Though the film is hardly laugh-free, its uneven jokes appear to have breezed through a very forgiving editing process."[63] Joe Morgenstern of The Wall Street Journal too found the film's length "exhausting," noting, "Some of it sputters, settling for smiles instead of laughs, and much of it flounders while the slapdash script searches [...] for ever more common denominators in toilet humor."[64] 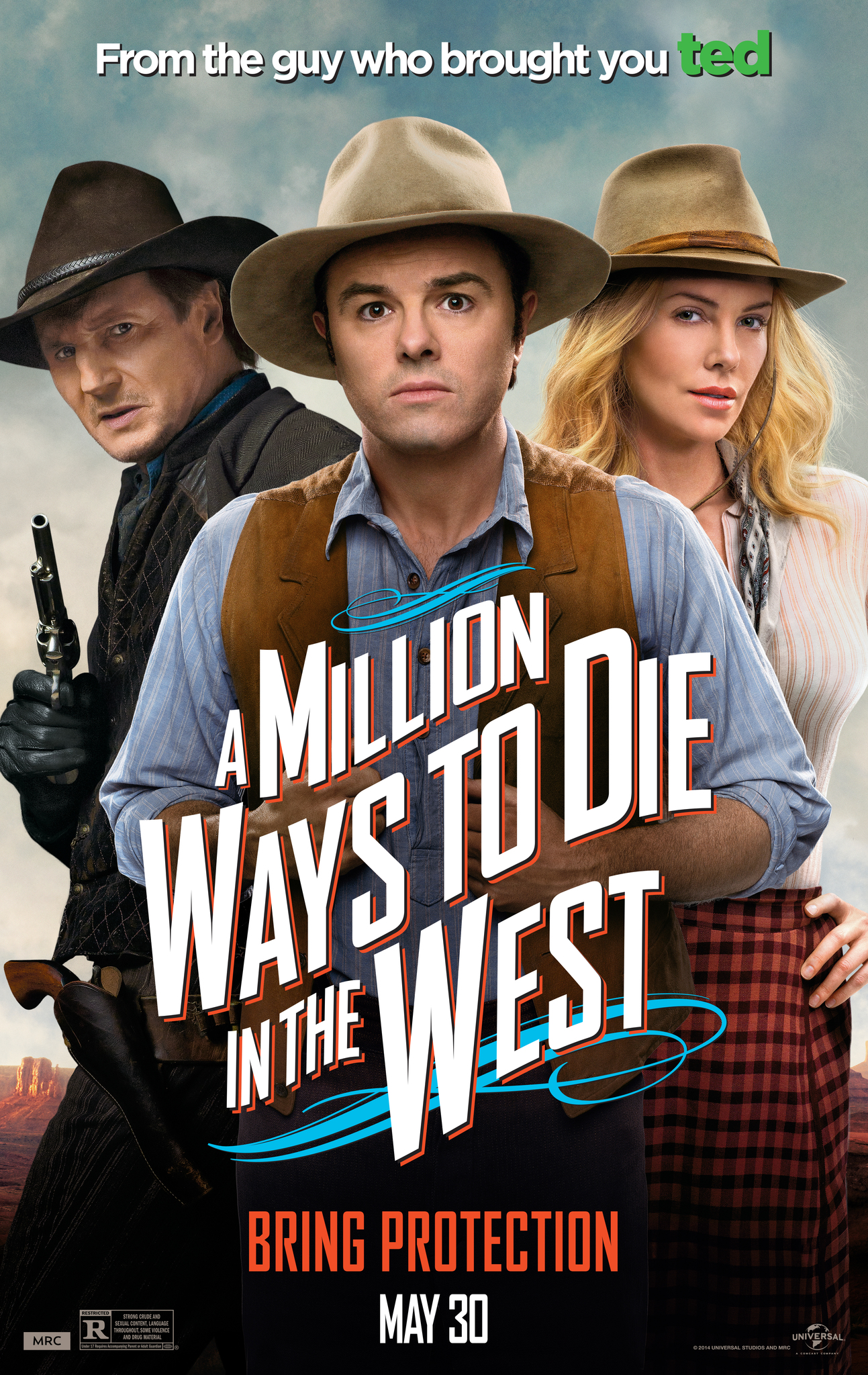 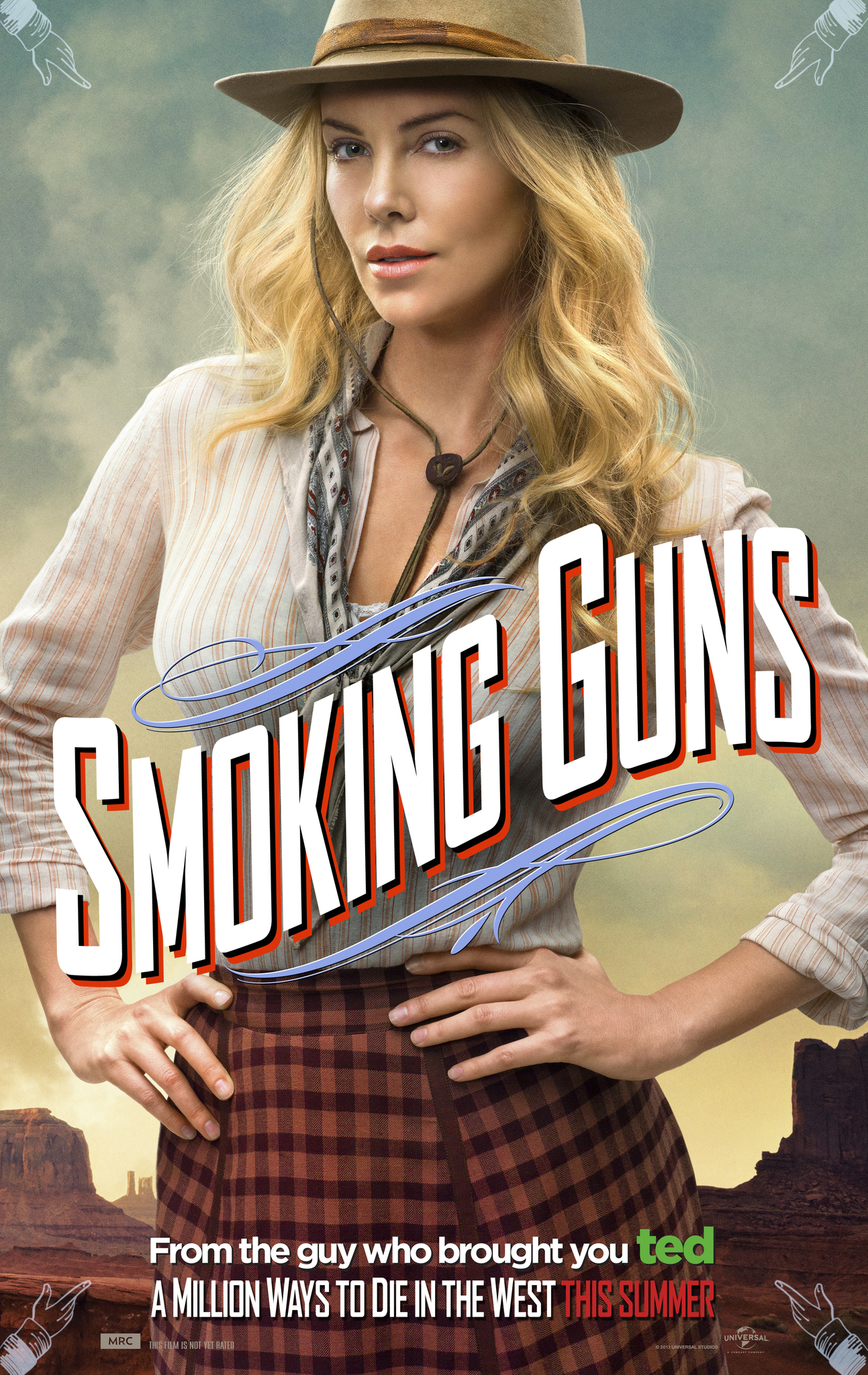 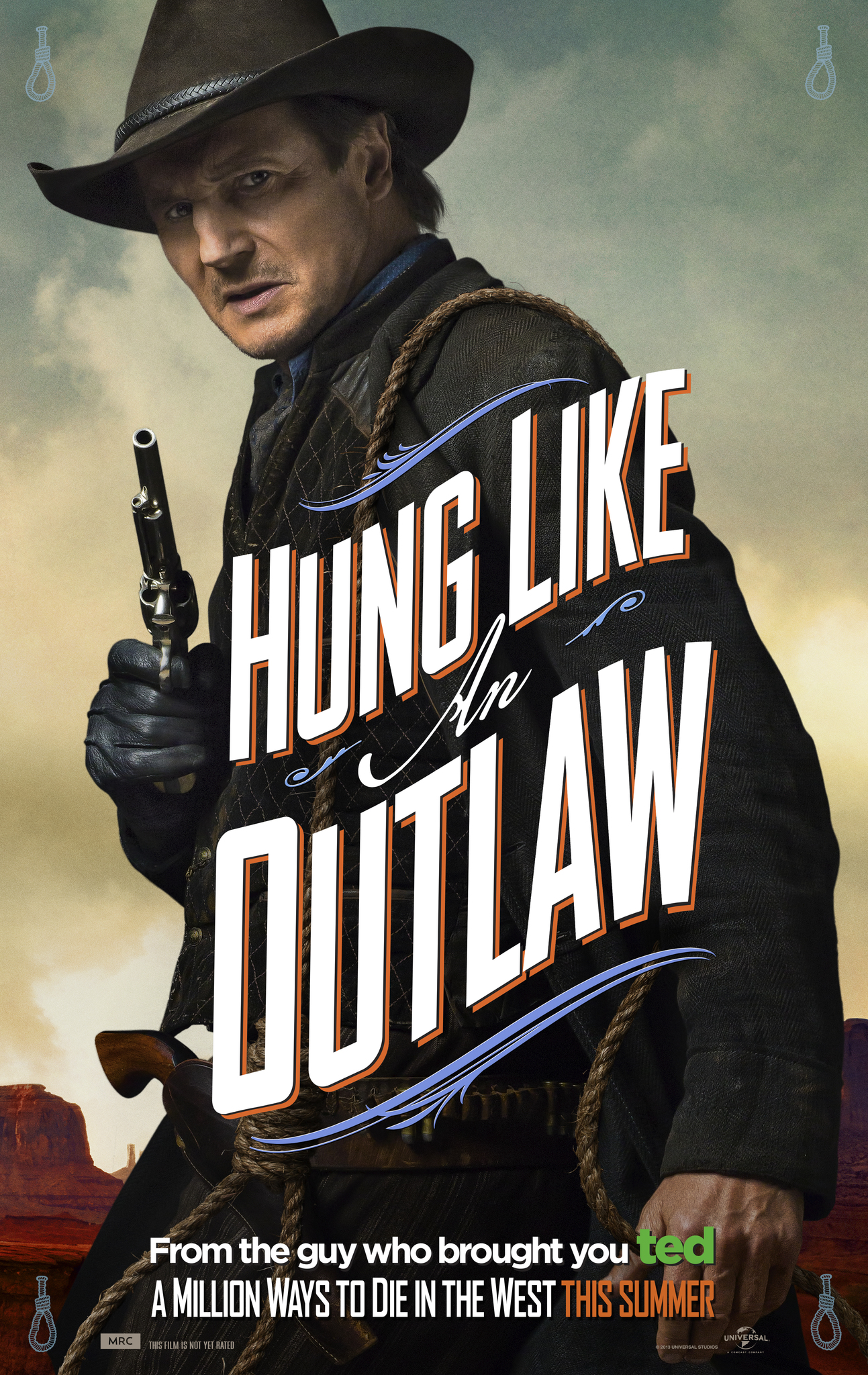 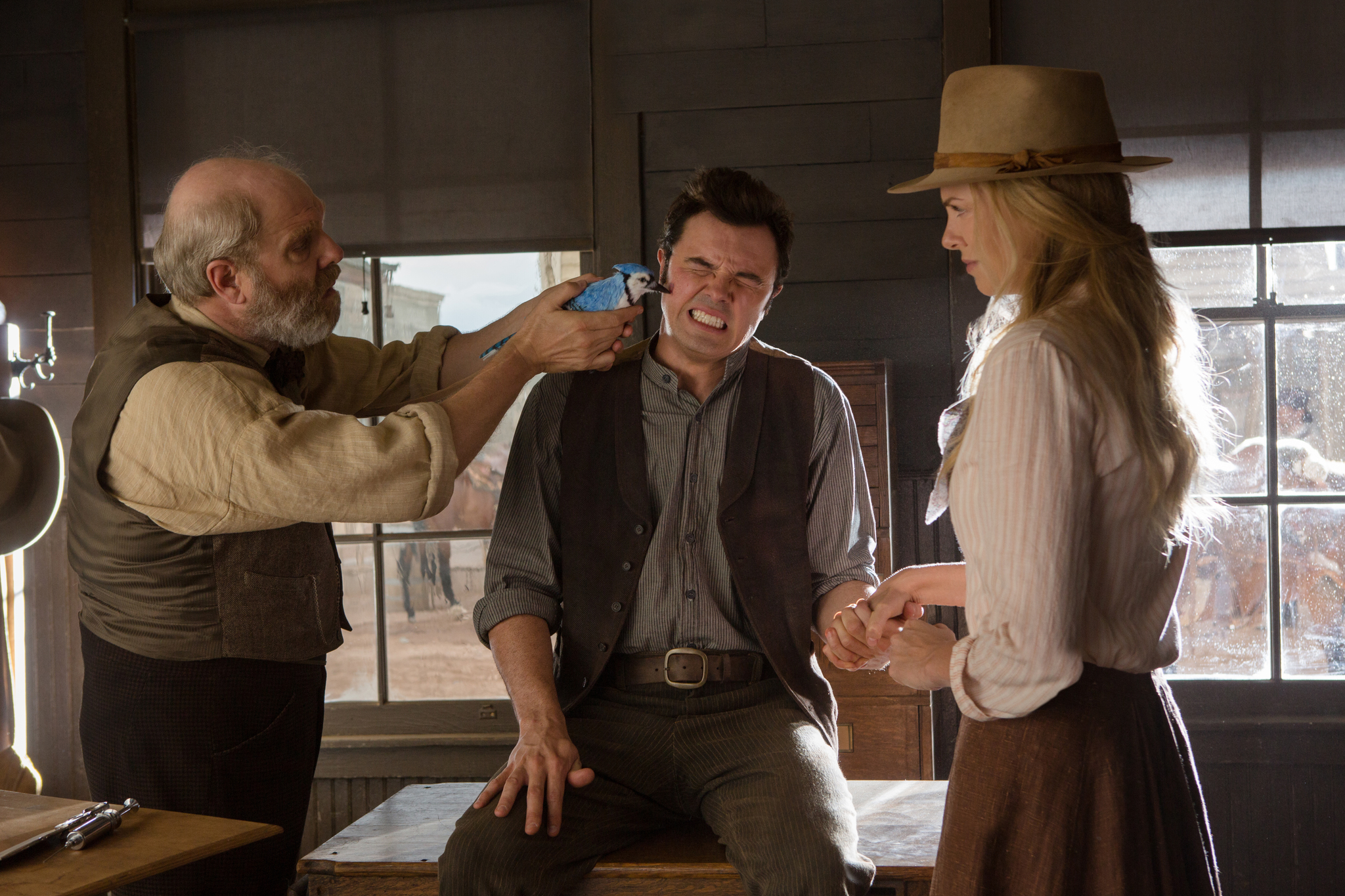 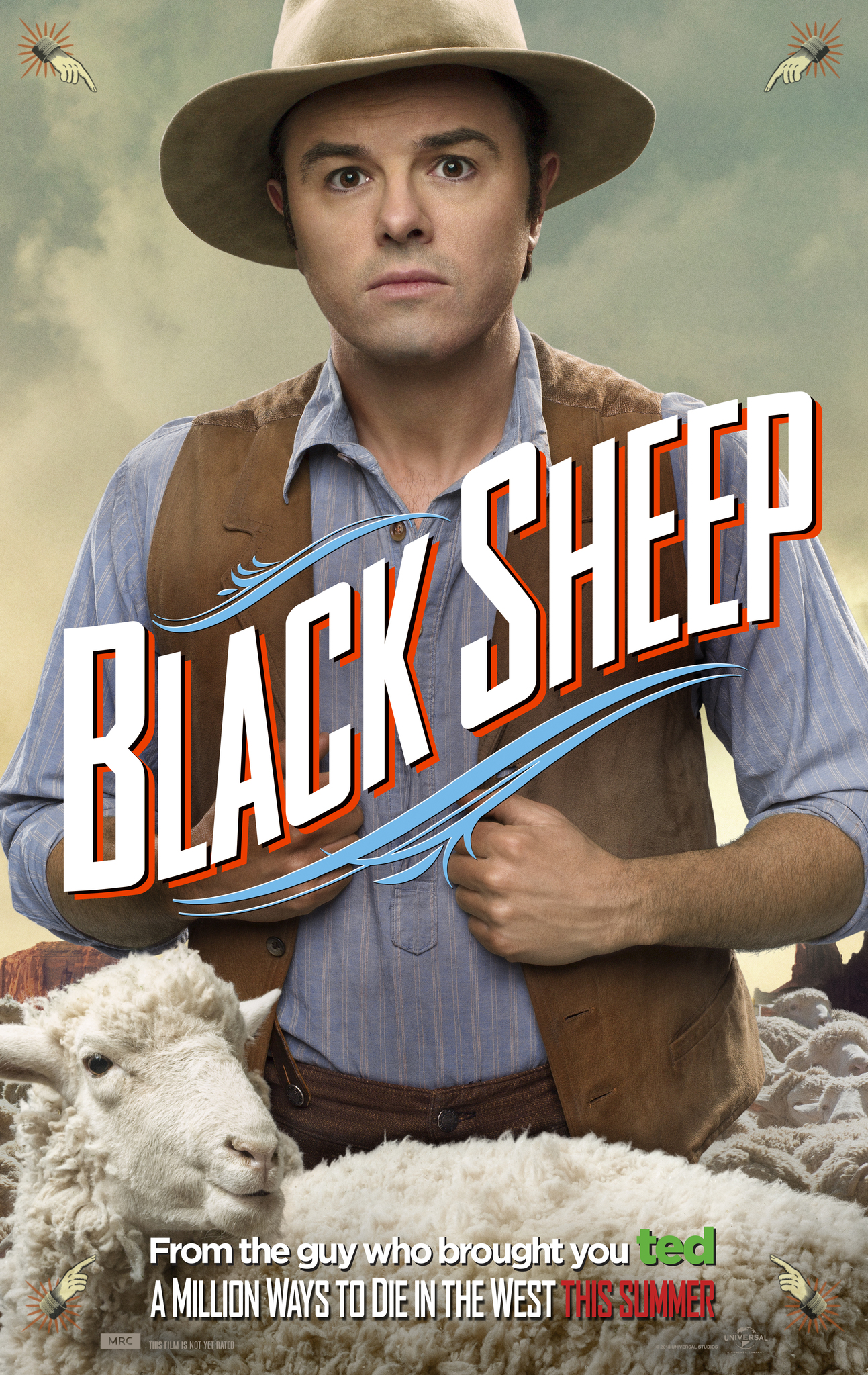 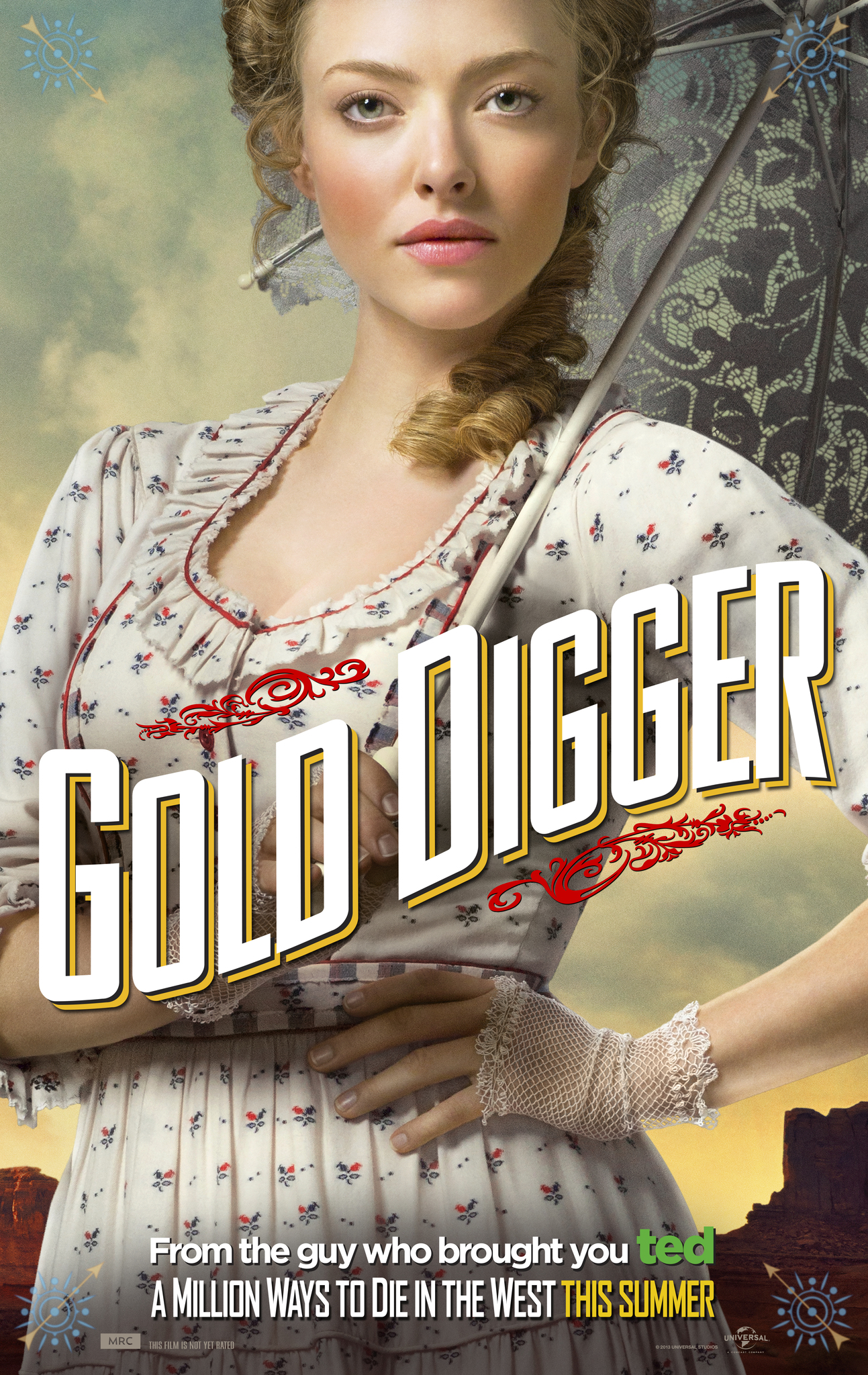 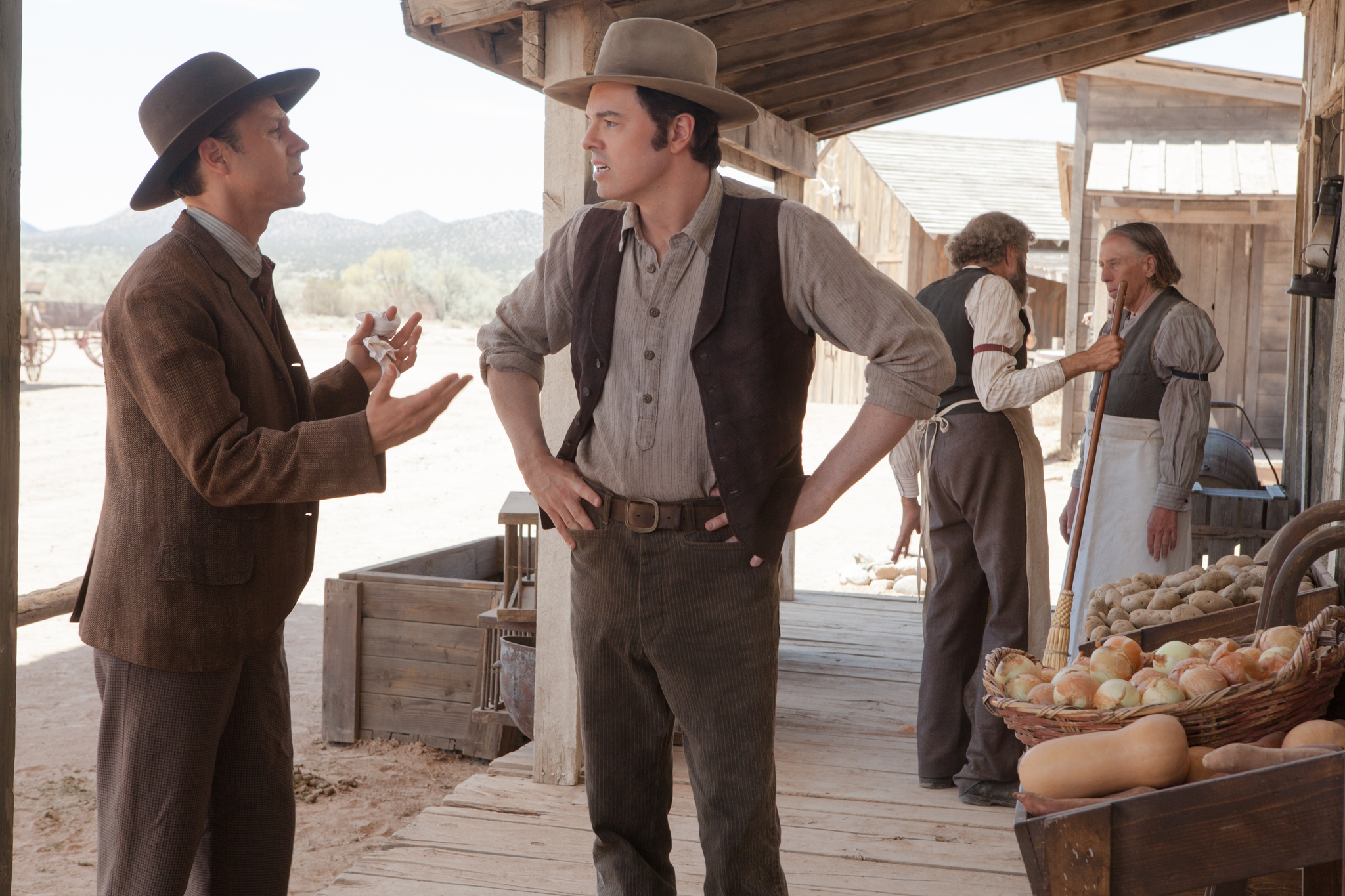 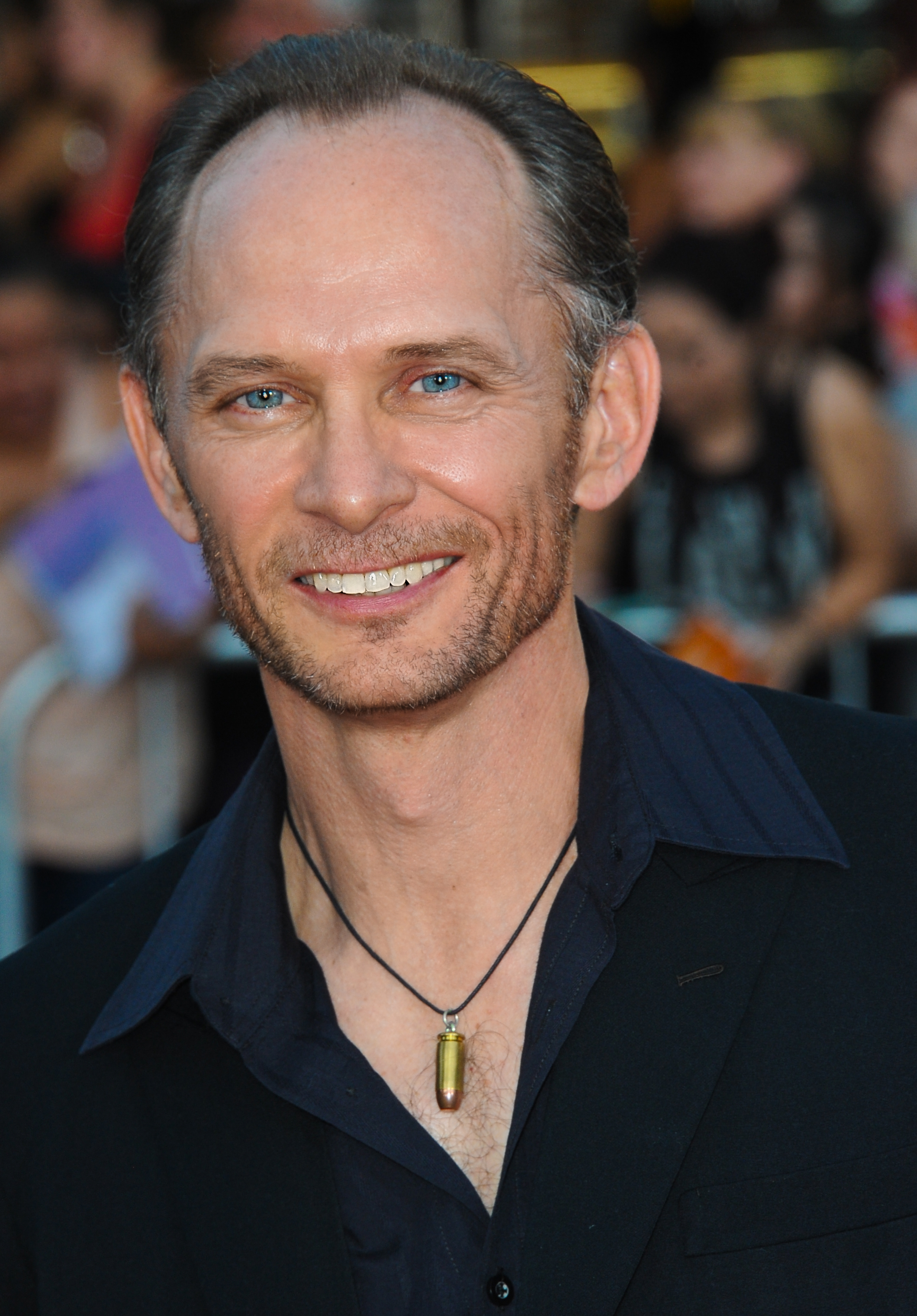 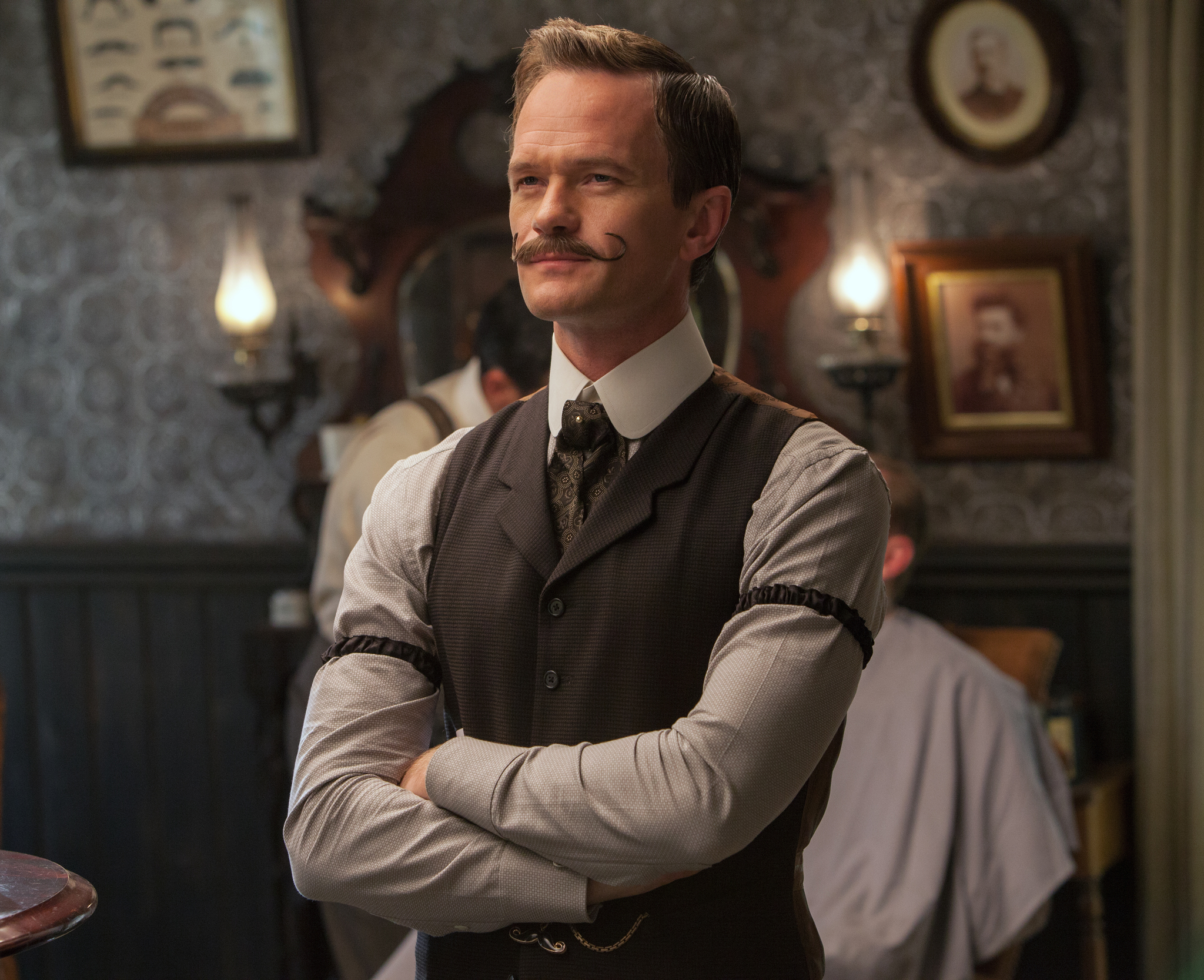 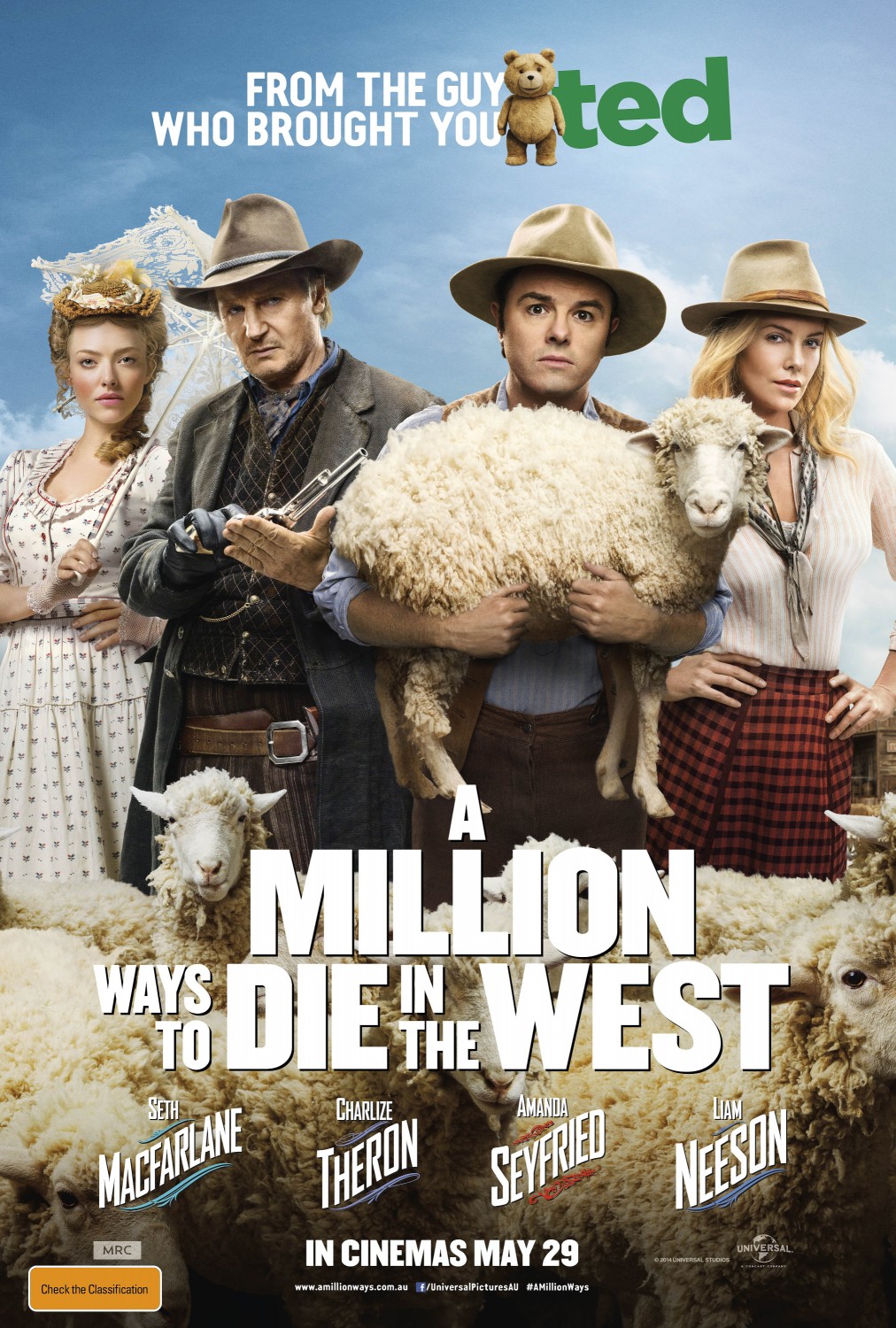 A Million Ways To Die In The West – Restricted Trailer

Seth MacFarlane directs, produces, co-writes and plays the role of the cowardly sheep farmer Albert in A Million Ways to Die in the West. After Albert backs out of a gunfight, his fickle girlfriend leaves him for another man. When a mysterious and beautiful woman rides into town, she helps him find his courage and they begin to fall in love. But when her husband, a notorious outlaw, arrives seeking revenge, the farmer must put his newfound courage to the test.
Starring alongside MacFarlane are Oscar® winner Charlize Theron, Liam Neeson, Amanda Seyfried, Giovanni Ribisi, Sarah Silverman and Neil Patrick Harris. MacFarlane reunites many of the filmmakers behind Universal and MRC’s hit film Ted including Scott Stuber (Bluegrass Films) and Jason Clark who produce, and Wellesley Wild and Alec Sulkin who co-wrote the script. 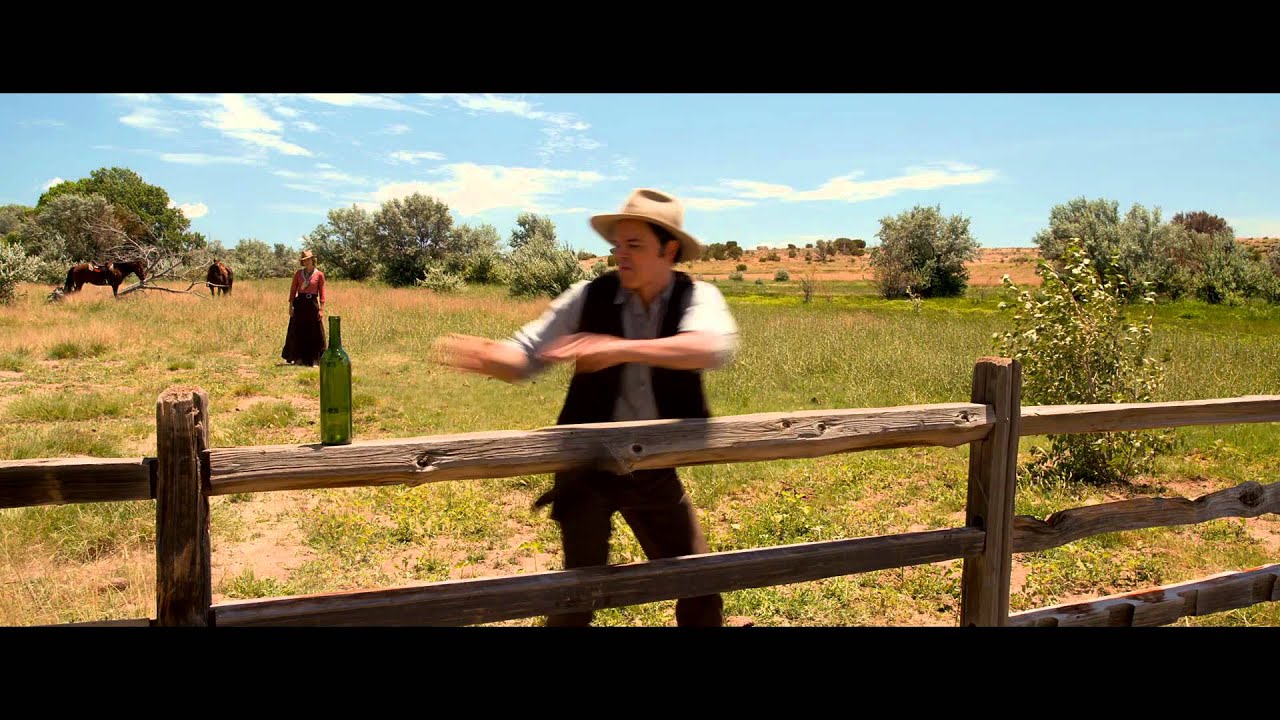