Tessa Young is a dedicated student, dutiful daughter and loyal girlfriend to her high school sweetheart. Entering her first semester of college, Tessa’s guarded world opens up when she meets Hardin Scott, a mysterious and brooding rebel who makes her question all she thought she knew about herself — and what she wants out of life.

After is a 2019 American romantic drama film directed by Jenny Gage, based on the 2014 new adult fiction novel of the same name by Anna Todd, originally released as a fanfiction on Wattpad. The screenplay is written by Susan McMartin, Tamara Chestna, and Jenny Gage. The film stars Josephine Langford and Hero Fiennes Tiffin, and follows an inexperienced teenage girl who begins to romance a mysterious student during her first months of college. The cast includes Selma Blair, Inanna Sarkis, Shane Paul McGhie, Pia Mia, Khadijha Red Thunder, Dylan Arnold, Samuel Larsen, Jennifer Beals, and Peter Gallagher in supporting roles.

Development of a film adaptation based on Todd's novel began in 2014, when Paramount Pictures acquired the rights to the film adaptation and hired Susan McMartin as screenwriter. In 2017, CalMaple Media and Offspring Entertainment bought the rights, with writer Tamara Chestna hired to rework McMartin's script, and director Jenny Gage overseeing the script's final revisions. The film was also produced by Voltage Pictures, Diamond Film Productions, and Frayed Pages Entertainment. In May 2018, Fiennes Tiffin was cast in the lead role alongside Julia Goldani Telles; in July of the same year, however, Goldani Telles dropped out due to scheduling conflicts, and was replaced by Langford. Principal photography began on July 16, 2018 and concluded on August 24 that same year, with filming taking place in Atlanta, Georgia.

After premiered at The Grove in Los Angeles on April 8, 2019, before it was released in Latin America on April 10, 2019, by Diamond Films, and in the United States on April 12, 2019, by Aviron Pictures. The film received largely negative reviews from critics, who felt its screenplay and narrative glamourized abusive relationships. The film was a commercial success, grossing $69.7 million worldwide against its $14 million budget. A sequel, After We Collided, was released in select countries on September 2, 2020, and was released in the United States on October 23, 2020.

Tessa Youn begins her freshman year of college by moving into her dorm room with her mother, Carol, and her boyfriend, Noah. During this process, she meets Steph, her new roommate, and her girlfriend, Tristan. The day after, Tessa shares a brief encounter with Steph's friend, Hardin Scott. The next day, Steph persuades Tessa to attend a party where she meets Steph's other friends, Zed, Molly, and Jace, and meets Hardin for the second time. The group play truth or dare, revealing, in turn, Tessa's virginity; she is dared to kiss Hardin but refuses. Later at the party, Hardin attempts to kiss Tessa, but she rejects his advances and leaves.

The following day, Tessa meets Landon, a classmate, who reveals to her that he and Hardin are soon to become stepbrothers, with his mother engaged to Hardin's father. Following a class debate, Hardin approaches Tessa and insists they start over, inviting her to a nearby lake. While they swim, Hardin kisses Tessa, saying that they cannot remain only friends. Later, the two encounter Molly and Zed at a diner, following which Tessa promises to tell her boyfriend about her and Hardin's kiss. Hardin tells her not to, saying that he does not date, disappointing Tessa. Noah surprises Tessa with a visit, and the two experience an evening together around a bonfire. In a game of 'suck and blow' at the bonfire party, Jace purposely fails to kiss Tessa, making Hardin jealous and leading to a physical confrontation. While Noah sleeps in Tessa's bed after the party, she leaves to check in on Hardin, who has destroyed the house in a drunken rage. She comforts him, and the two kiss.

The next day, Tessa returns to her dorm to check on Noah, who discovers her affair with Hardin and leaves her heartbroken. Tessa and Hardin finally decide to date, but her mother threatens to cut her off financially if she continues the relationship, believing Hardin to be a bad influence. Hardin finds an apartment for the two to live together, and they attend his father's wedding reception. Hardin reveals that his father was a drunk and that his mother was assaulted by the men his father provoked while drunk. Tessa comforts him, and the two head back to their apartment to have sex.

Later, Tessa grows concerned about the text messages sent to Hardin by Molly; Tessa attempts to confront him, but he dismisses her and leaves. After leaving the apartment searching for him, Tessa finds him at a diner with Molly, Zed, Steph, and Jace. Molly cruelly reveals Hardin's true intentions by showing Tessa a video from the first party they attended, telling that Hardin only pursued Tessa as a challenge, intending to make her fall in love before breaking her heart. Hardin attempts to convince Tessa that his intentions changed as he got to know her, but Tessa ends their relationship.

Tessa leaves heartbroken and returns home to reconcile with her mother and Noah, who both forgive her. In the weeks that follow, Tessa cuts ties with Steph and her group of friends, eventually interviewing for an internship at Vance Publishing to leave college altogether. Before she leaves college, Tessa's lecturer, Professor Soto, hands her an essay written by Hardin, in which he confesses his love for Tessa; after reading it, she returns to the lake to meet Hardin.

In 2013, author Anna Todd posted the first chapters of a fanfiction titled After on fanfiction- and fiction-publishing website Wattpad.[3] The fanfiction's original storyline was loosely based on the boyband One Direction, and featured the band's members Harry Styles, Liam Payne and Zayn Malik, portrayed as students at Washington State University. The story followed Tessa Young, an "innocent good girl" who becomes involved in a relationship with "bad boy" Styles.

Within a month of publishing the first chapters, the story had acquired 544 million reads; Todd later landed a deal with Simon & Schuster to publish novelisations of the series, with the lead male character's name changed to Hardin Scott;[3] the novels were subsequently released in 2014. The books gained media attention and became New York Times bestsellers.[4]

On May 8, 2018, Julia Goldani Telles and Hero Fiennes Tiffin were cast in the main roles of Tessa Young and Hardin Scott respectively. The actors were selected by the production team, including Todd herself, who was present at the castings and contributed to the casting decisions.[citation needed]

In July 2018, Telles announced her exit from the film due to scheduling conflicts. In the same month, Josephine Langford was announced to play Tessa Young. Todd would later state that once she saw Langford, she "knew right away that was Tessa."[10][11] Pia Mia was cast in the role of Tristan, a previously male character in the books.[12] Executive producer Swen Temmel was cast as Jace,[10] Shane Paul McGhie and Khadijha Red Thunder were added as Landon Gibson and Steph Jones respectively,[13] Samuel Larsen was set as Zed Evans, and Inanna Sarkis played Molly Samuels. Producer Meadow Williams was additionally cast as Professor Soto, another previously male character in the books.[14] On July 27, Peter Gallagher and Jennifer Beals were announced to play Ken Scott and Karen Gibson, Hardin's father and Landon's mother, respectively,[15] with Selma Blair announced for Carol Young, Tessa's mother, and Dylan Arnold announced for Noah Porter on July 30.[16]

Principal photography was due to begin in June 2018 in Boston, Massachusetts.[17] In early July, producer Jennifer Gibgot stated that shooting would begin on July 16, 2018 in Atlanta, Georgia shortly after Langford had been cast as Tessa.[18] Principal photography was mainly conducted at Emory University, and production was completed on August 24 of the same year.[19]

After grossed $12.1 million in the United States and Canada and $57.6 million in other territories for a worldwide total of $69.7 million against a production budget of $14 million.[2]

In the United States and Canada, the film was released alongside Hellboy, Little and Missing Link, and was projected to gross $3–12 million from 2,138 theaters in its opening weekend.[23] The film made $2.9 million on its first day, including $550,000 from Thursday night previews. It went on to debut to $6 million, finishing eighth at the box office.[24] In its second weekend, the film dropped 58% to $2.5 million, finishing 11th.[25]

On Rotten Tomatoes, the film holds an approval rating of 18% based on 37 reviews, with an average rating of 3.58/10. The site's critical consensus reads, "Tepid and tired, After's fun flourishes are let down by its generic story."[26] The film has a weighted average of 30 out of 100 on Metacritic, based on eight critics, indicating "generally unfavorable reviews."[27] Audiences polled by CinemaScore gave the film an average grade of "B" on an A+ to F scale, while those at PostTrak gave it 2.5 out of 5 stars.[24]

Critics found the screenplay at fault, with Owen Gleiberman of Variety writing that After was an "innocuous teen pulp soap opera that flirts with 'danger' but, in fact, keeps surprising you with how mild and safe and predictable it turns out to be."[28] John Fink of The Film Stage echoed this sentiment, commenting that "the talented cast is burdened by a dead on arrival screenplay that waters down what could have been an intoxicating tale of first love," though he noted the film was "beautifully shot" and "occasionally aesthetically pleasing."[29]

Main article: After We Collided

In May 2019, a sequel to the film was announced, with both Langford and Fiennes Tiffin returning to their respective roles. Filming was due to start on August 12 of the same year.[30] On August 5, Dylan Sprouse was cast as Trevor,[31] with Roger Kumble announced for director on August 7.[32] John Jackson Hunter was announced to play a younger version of Hardin on August 14,[33] with Charlie Weber, Rob Estes, Louise Lombard, Candice King, Karimah Westbrook and Max Ragone announced to play Christian Vance, Ken Scott, Trish Daniels, Kimberly, Karen Scott and Smith Vance respectively on August 15.[34][35]

Two further sequels, After We Fell and After Ever Happy, have been completed.[36] Another sequel and prequel are in development.[37] 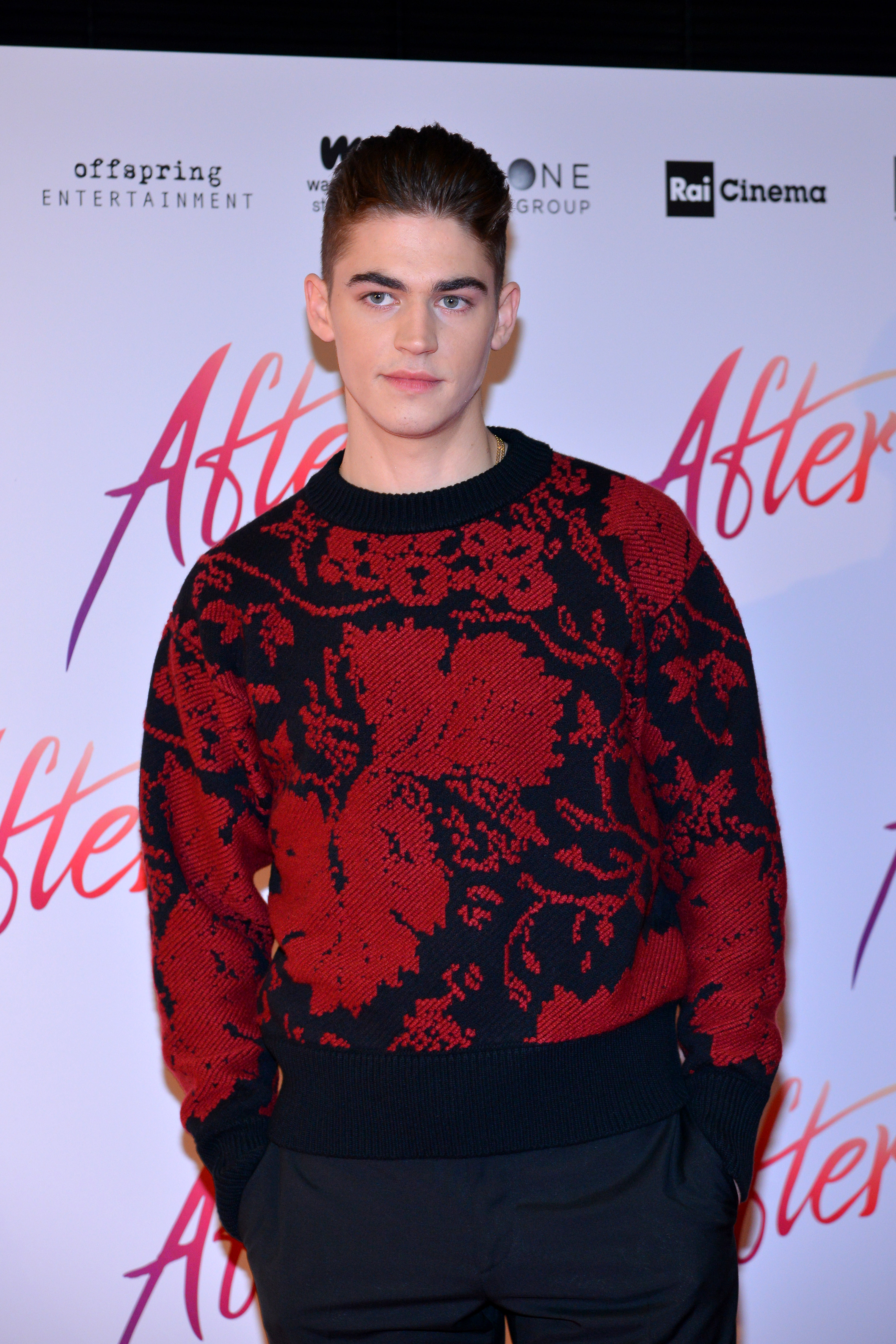 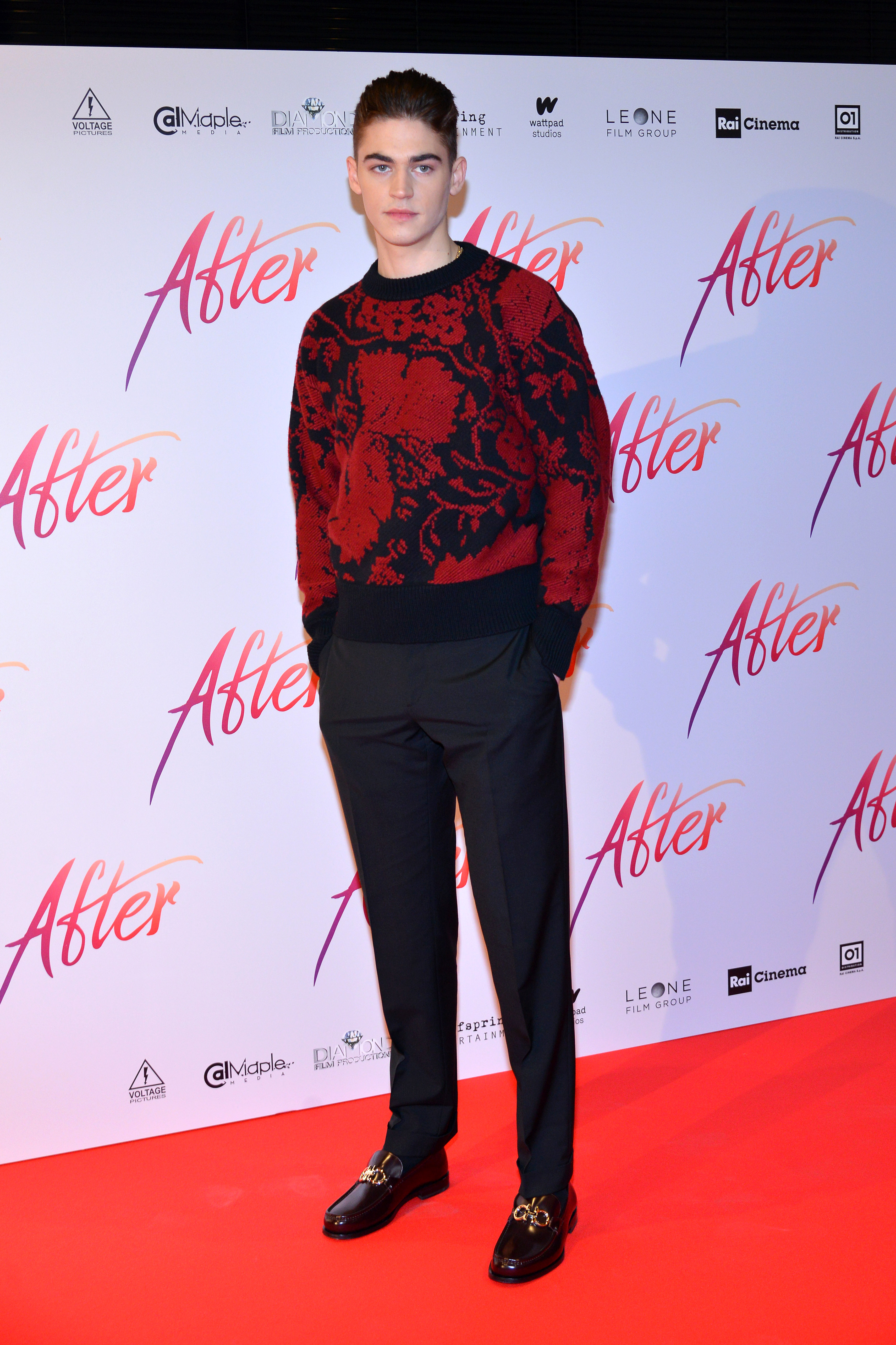 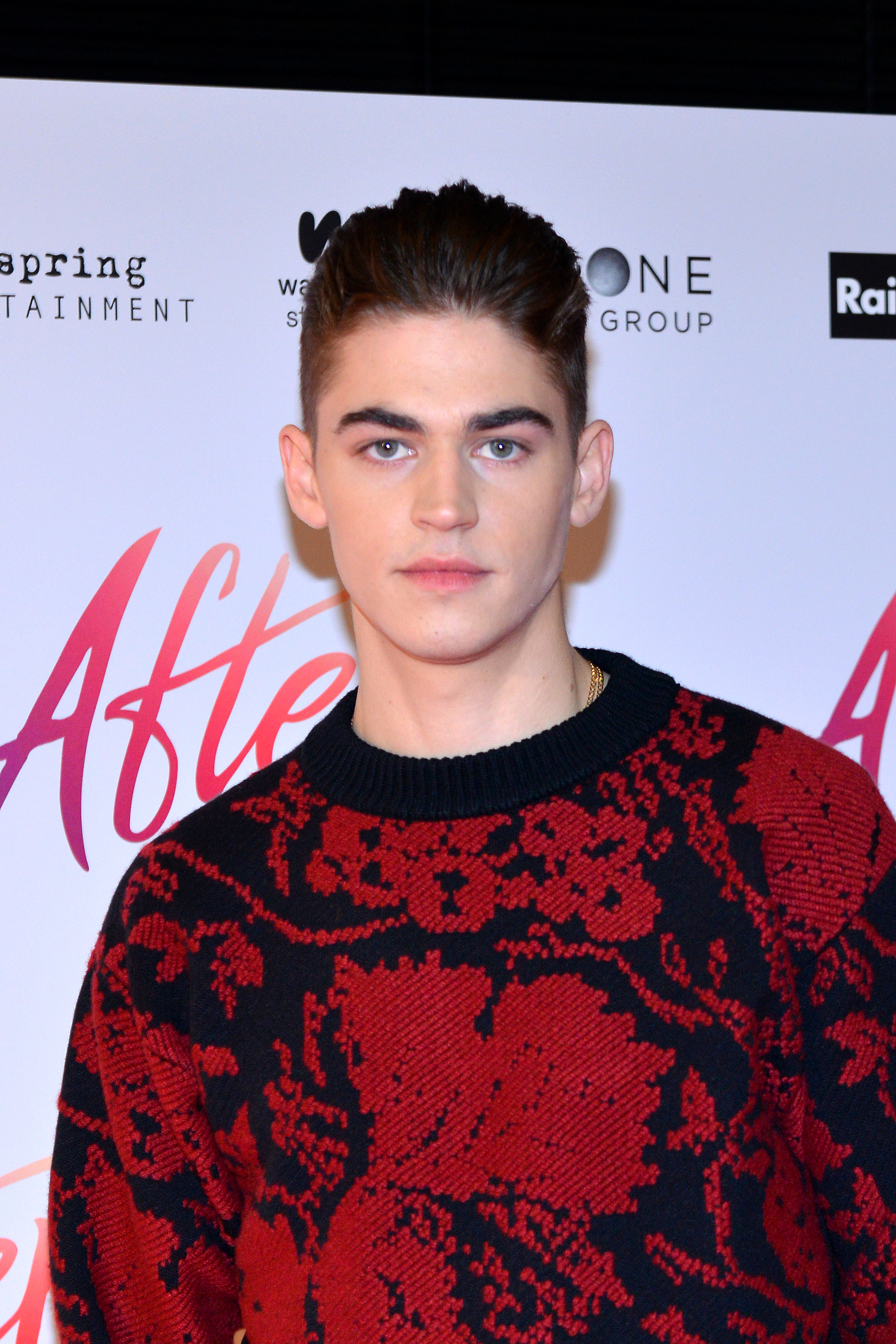 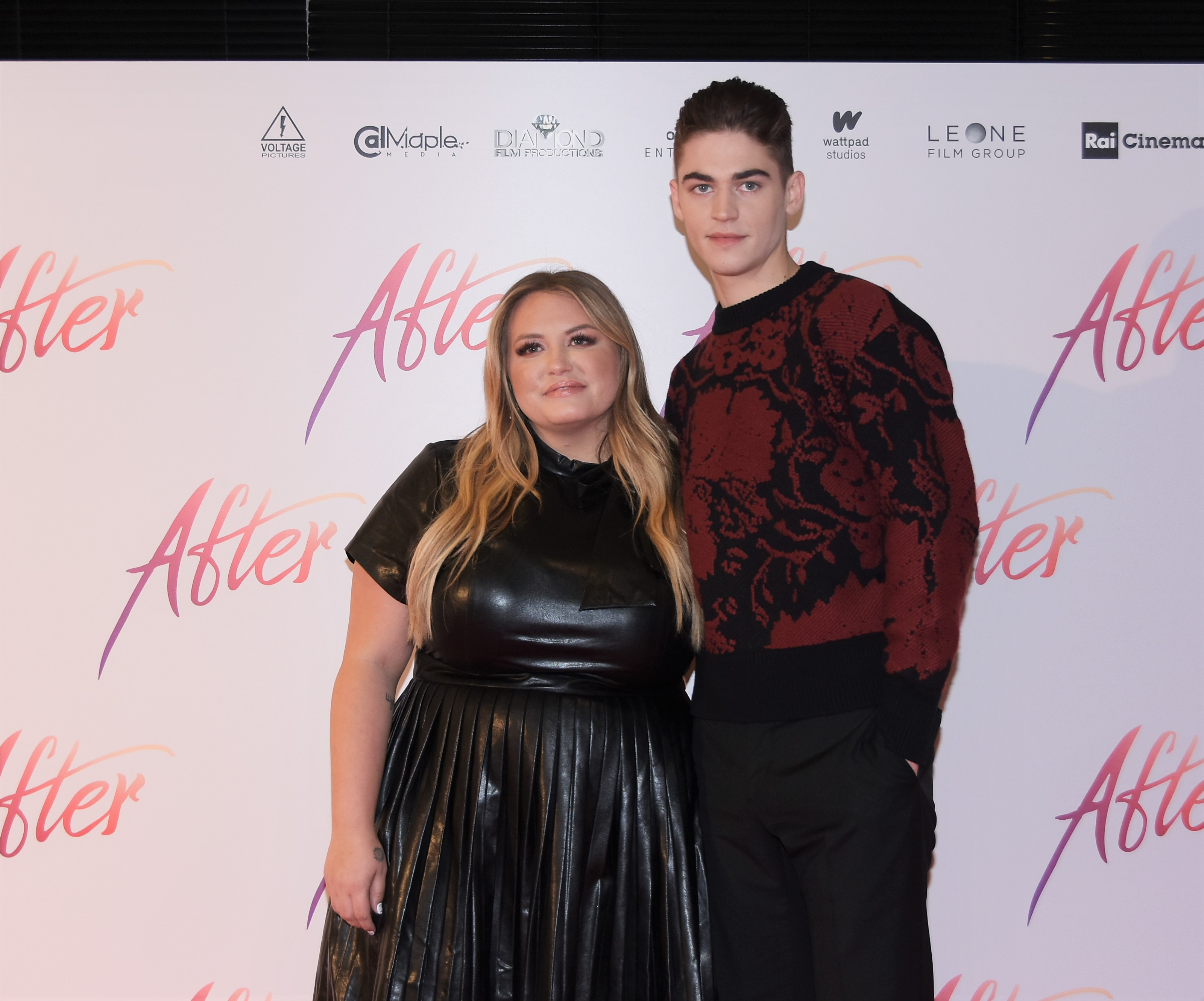 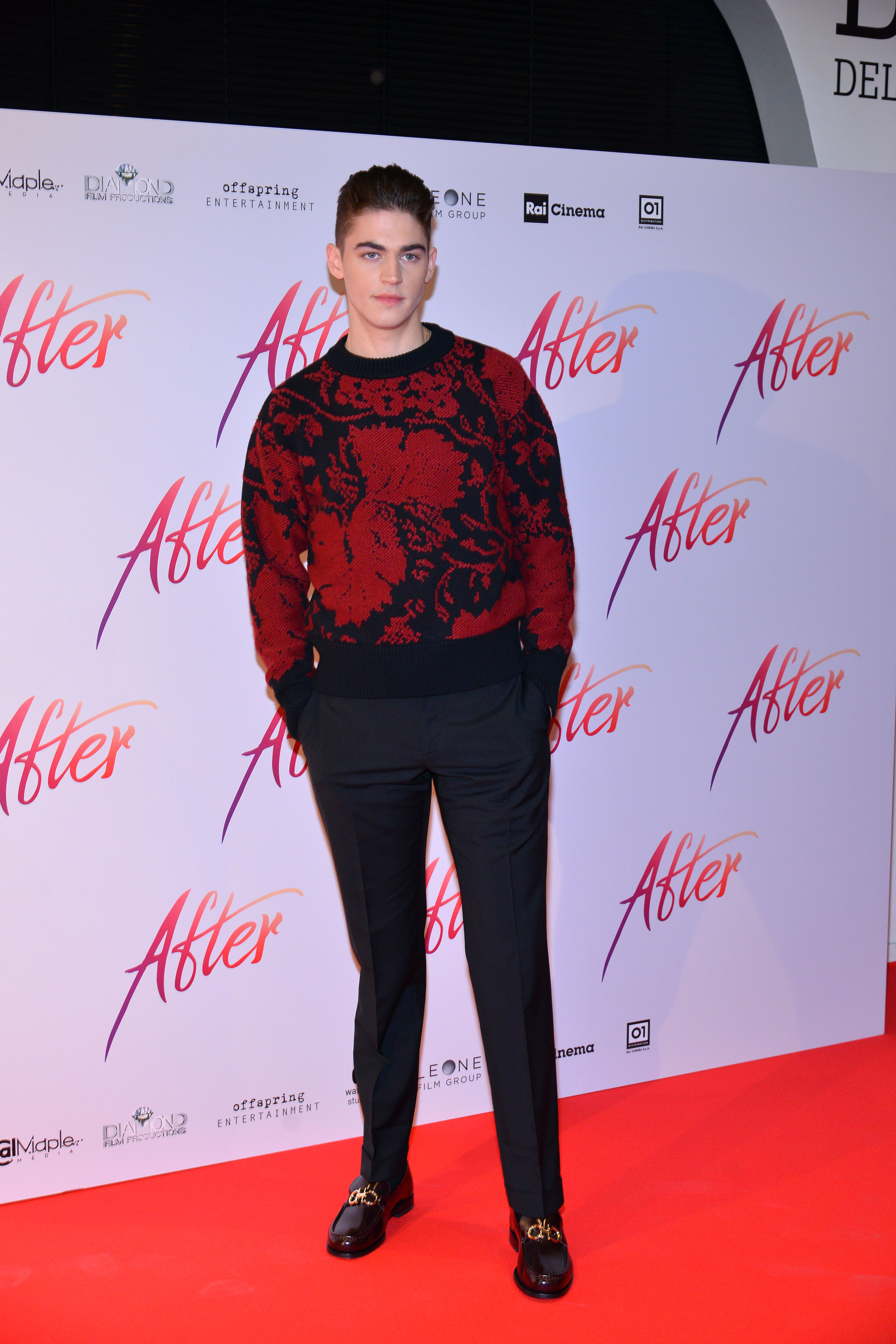 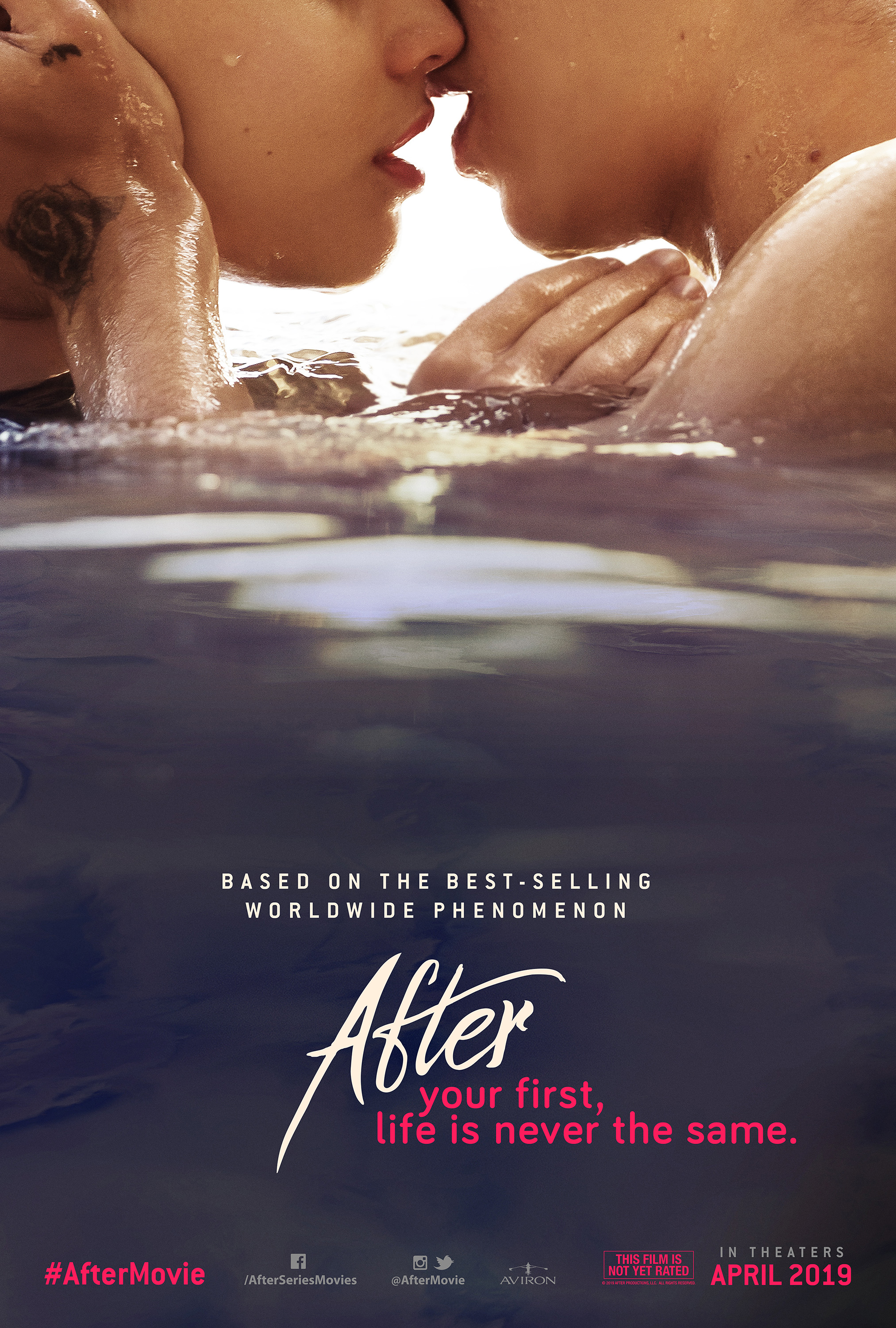 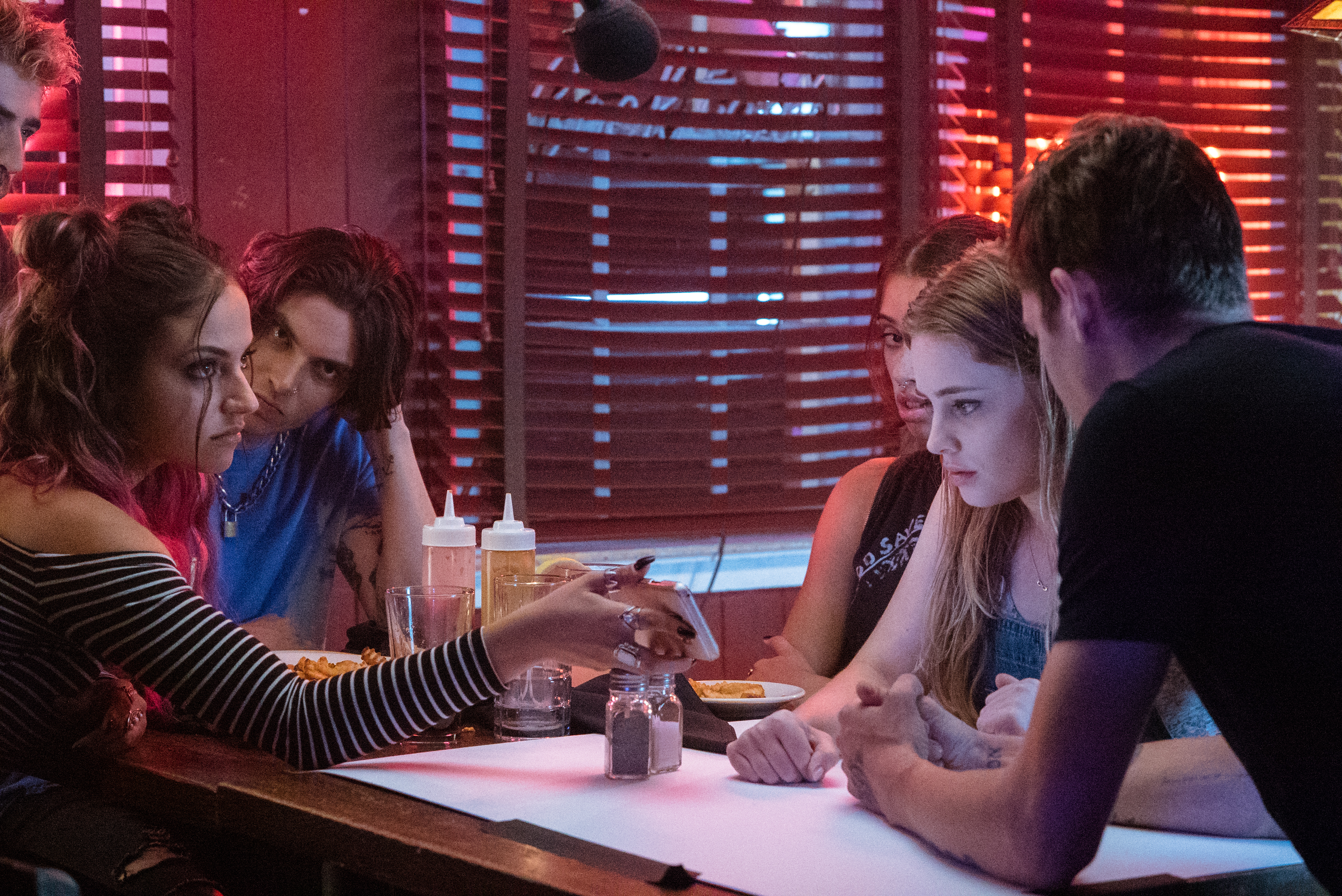 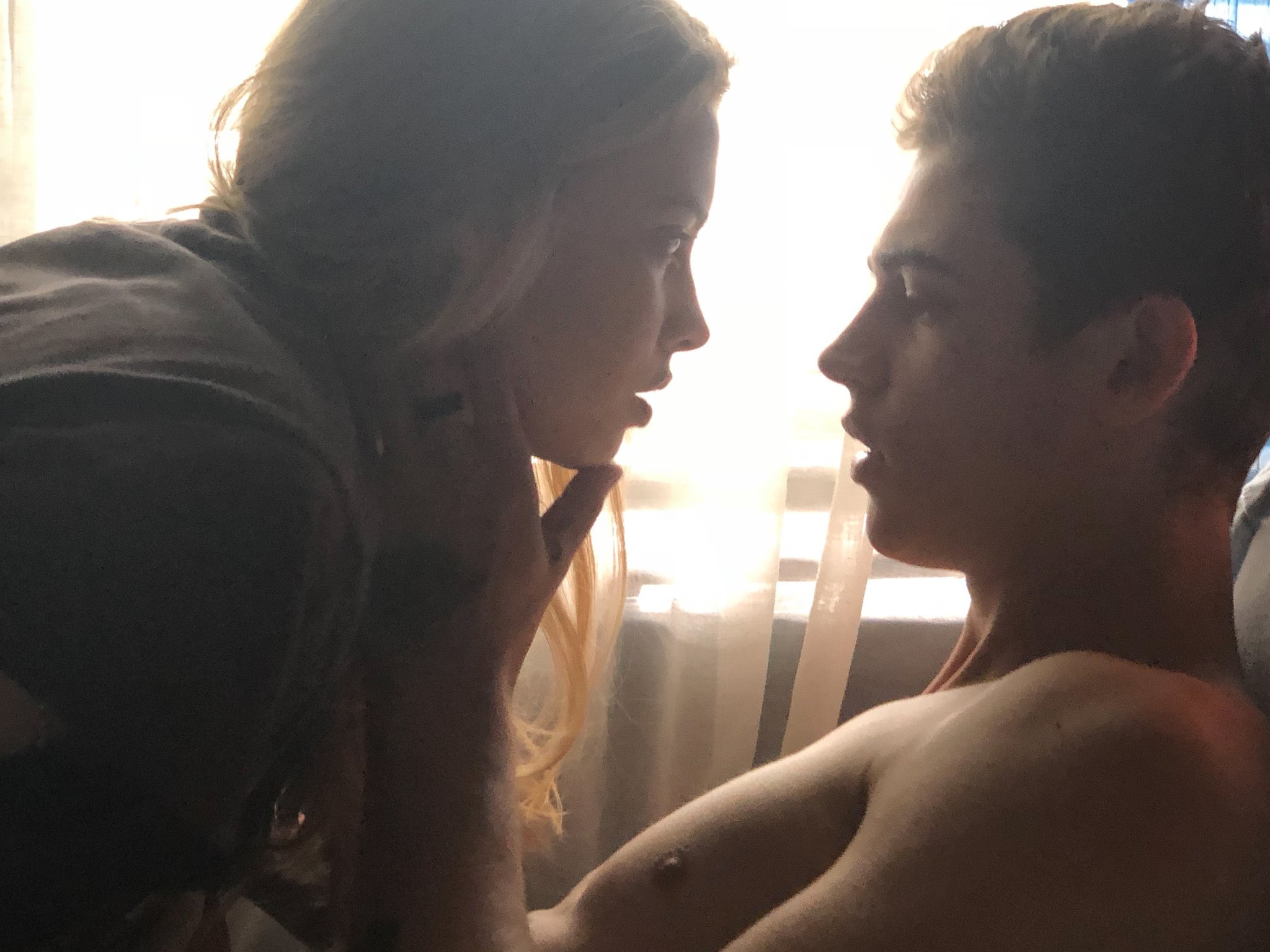 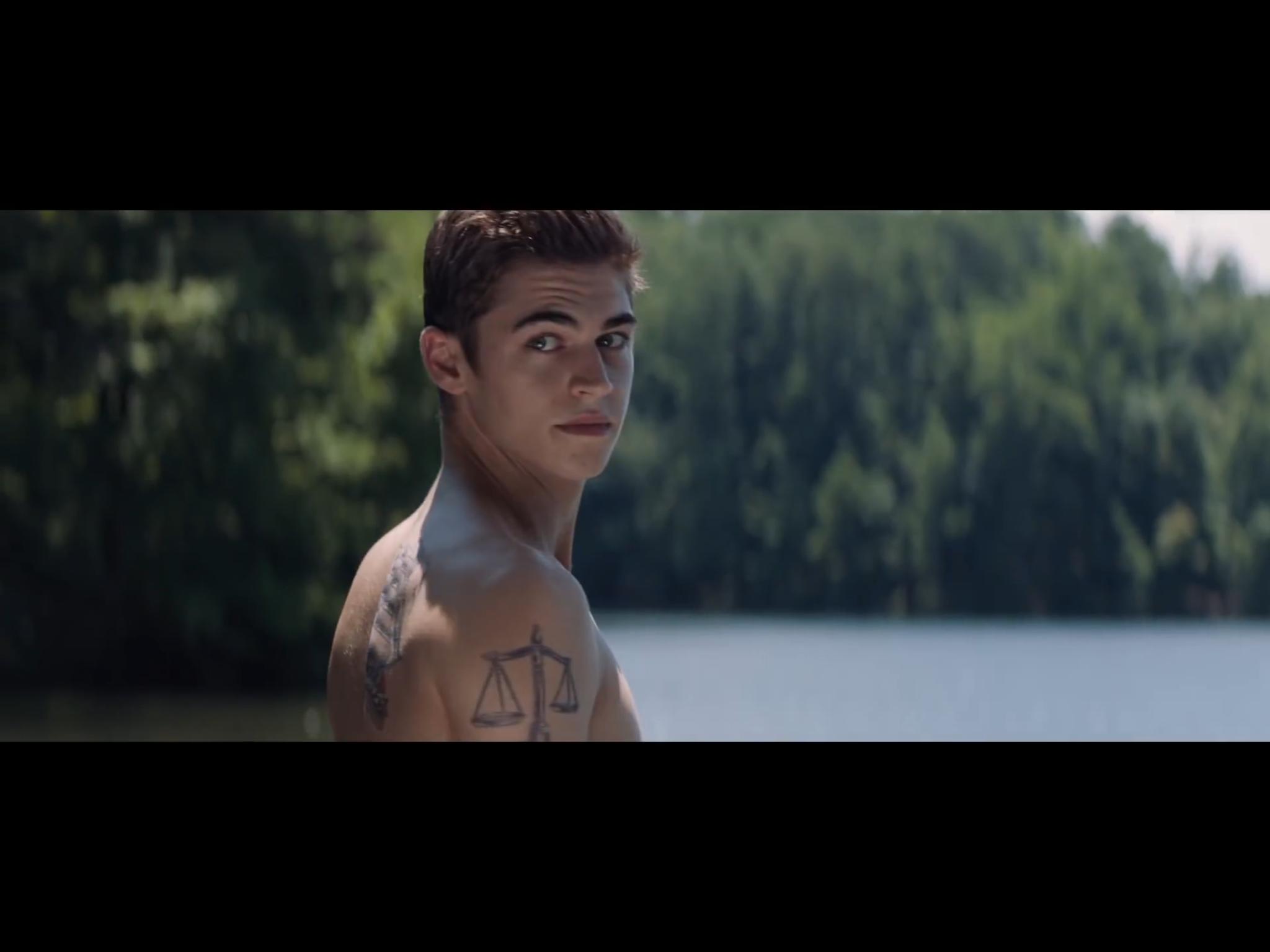 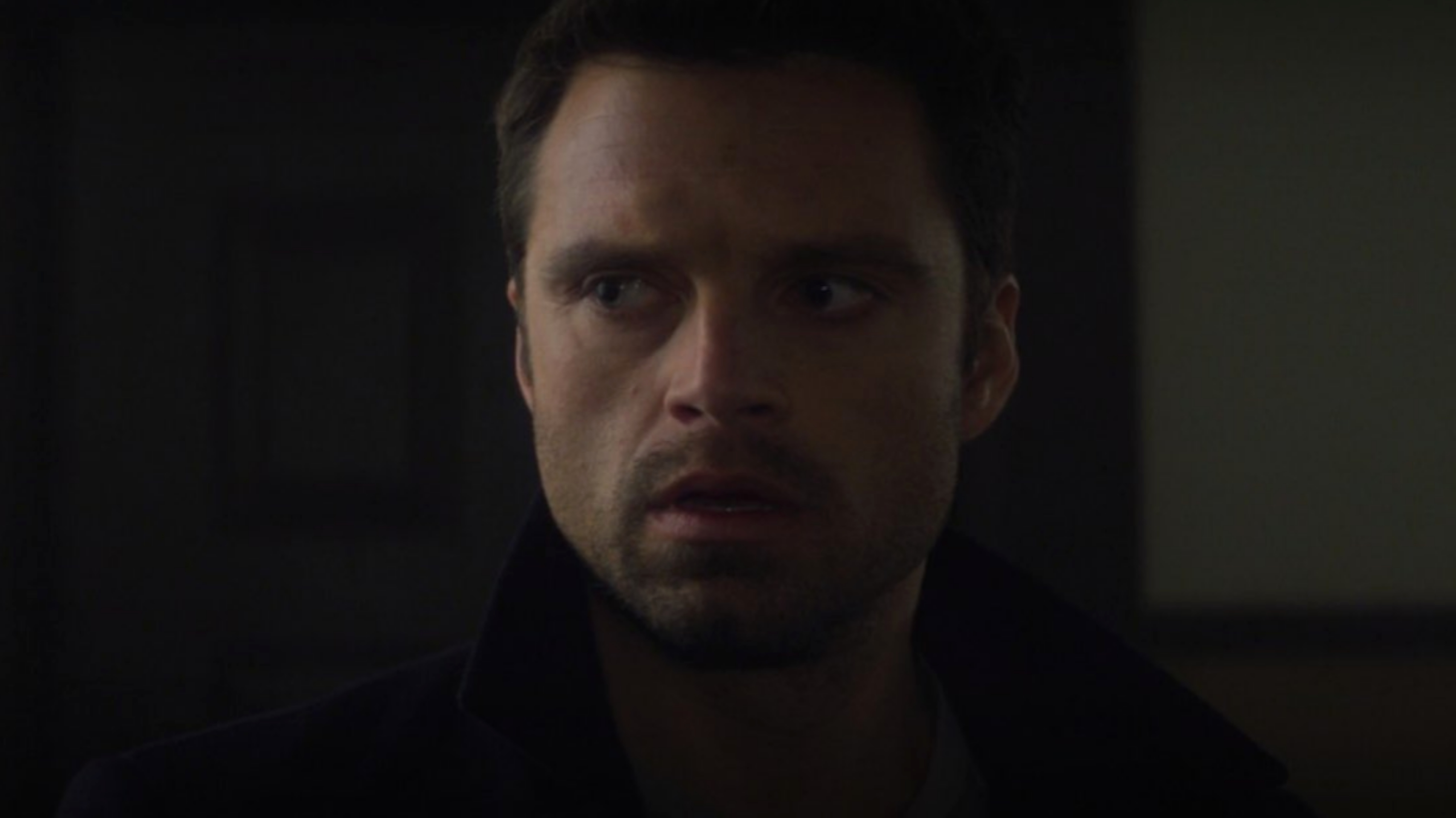 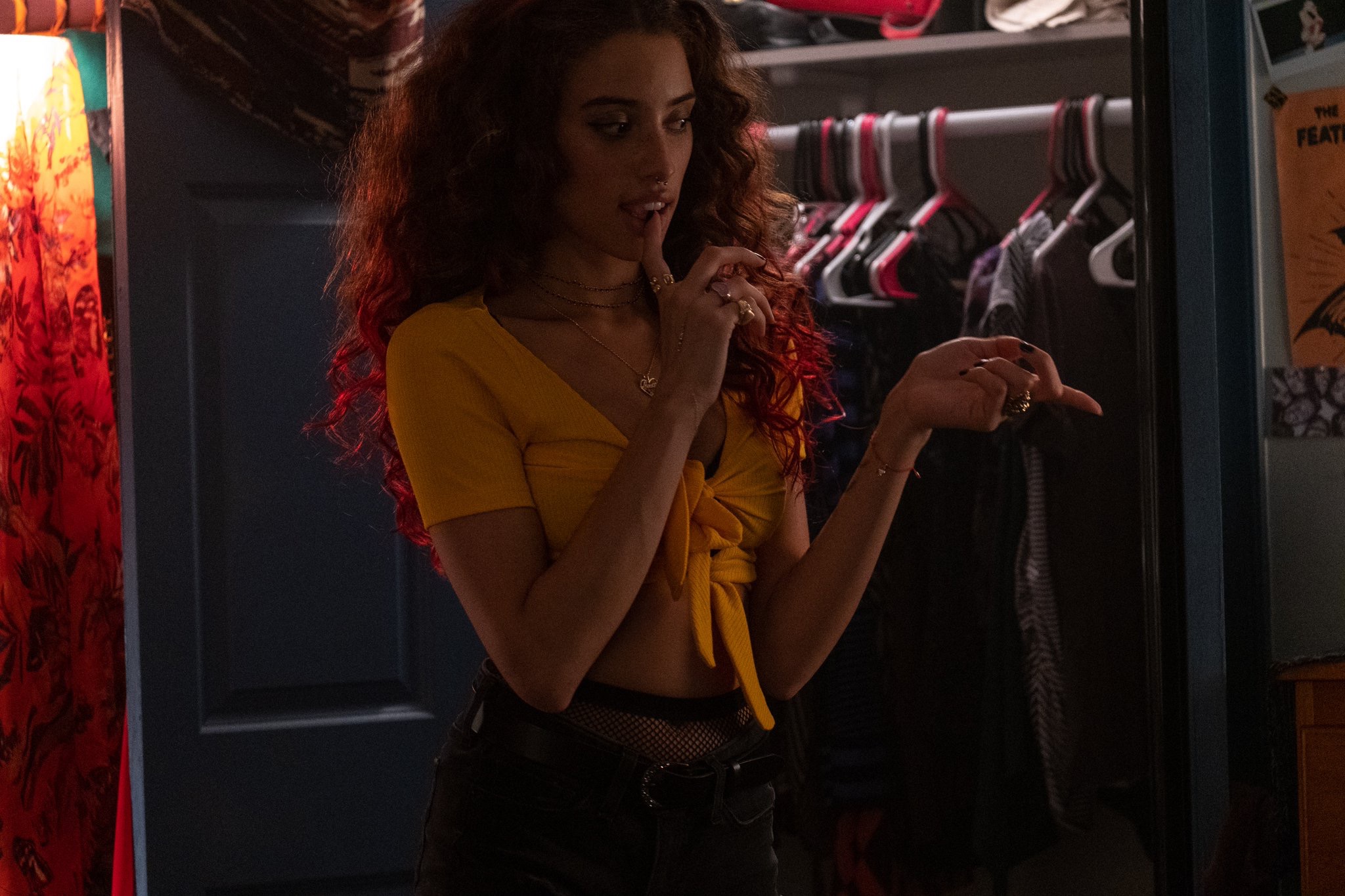 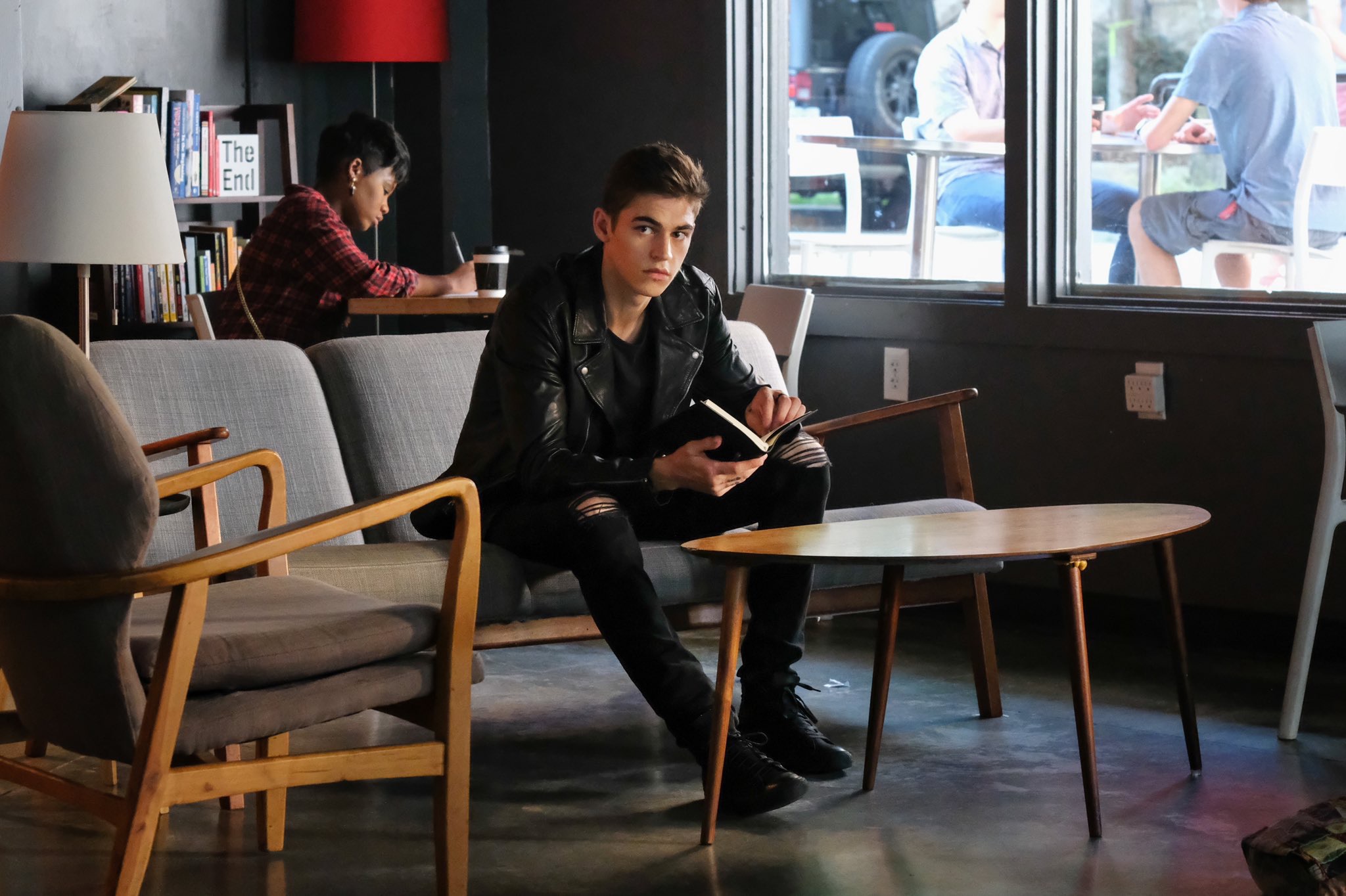 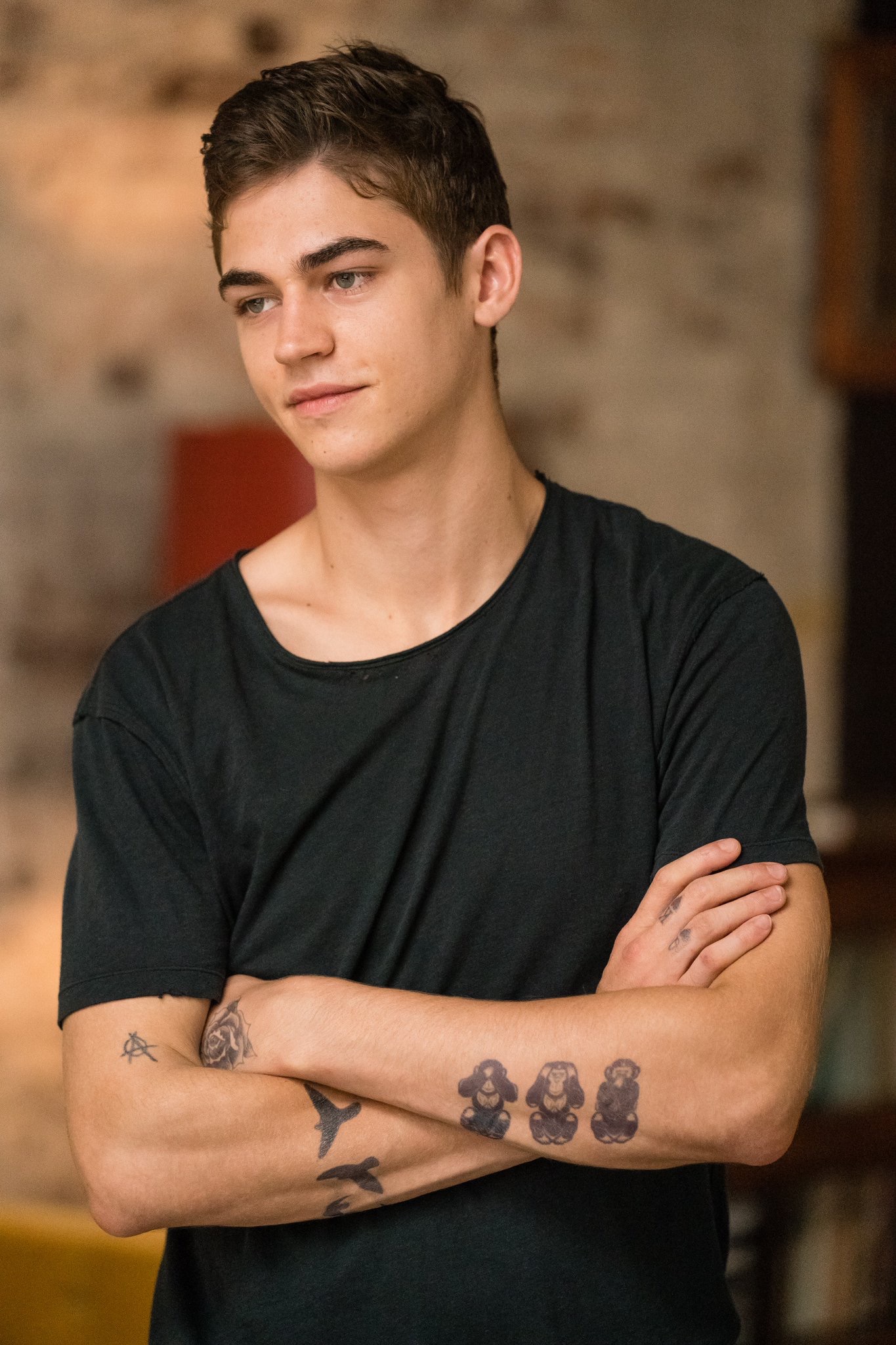 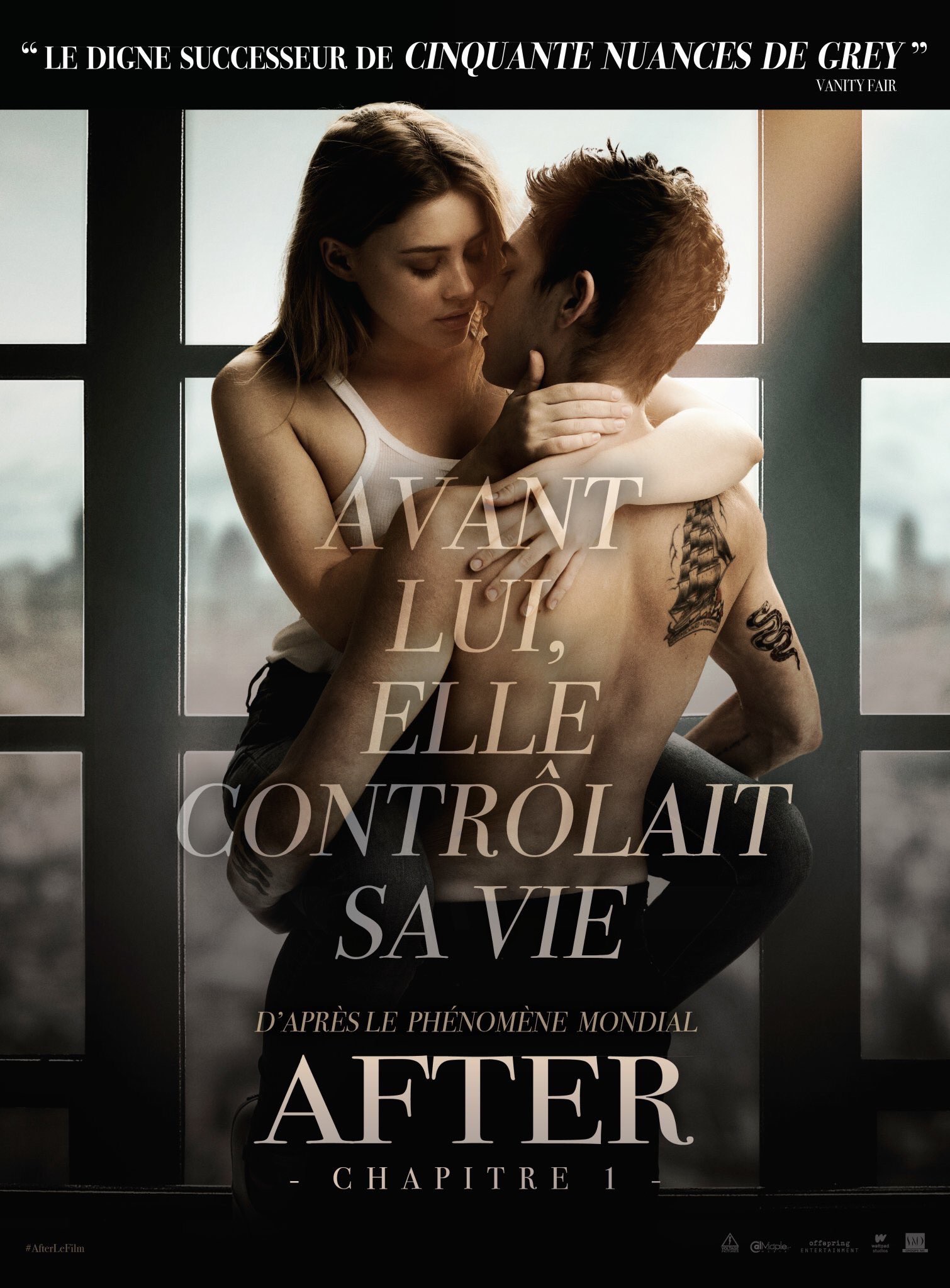 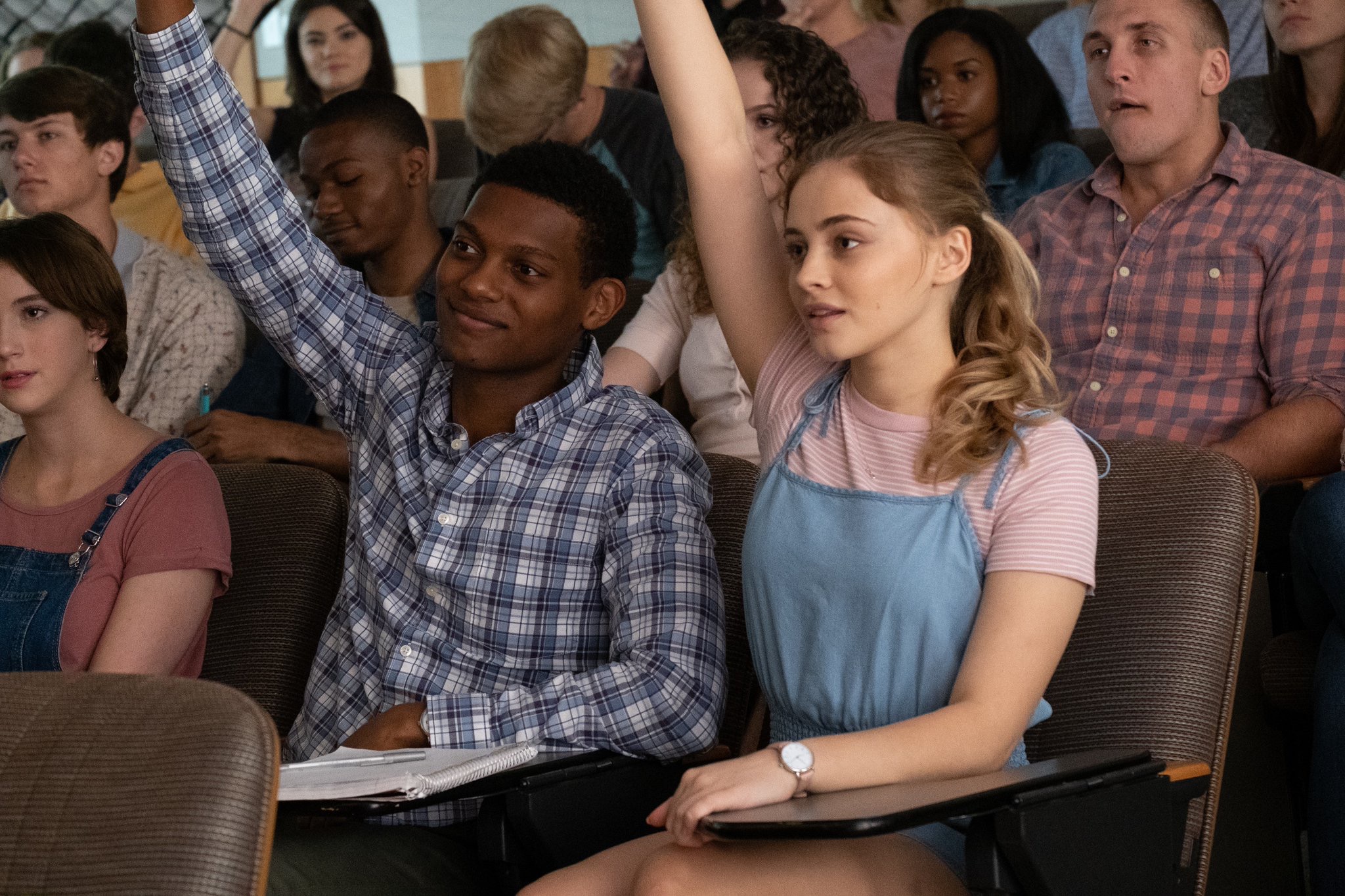 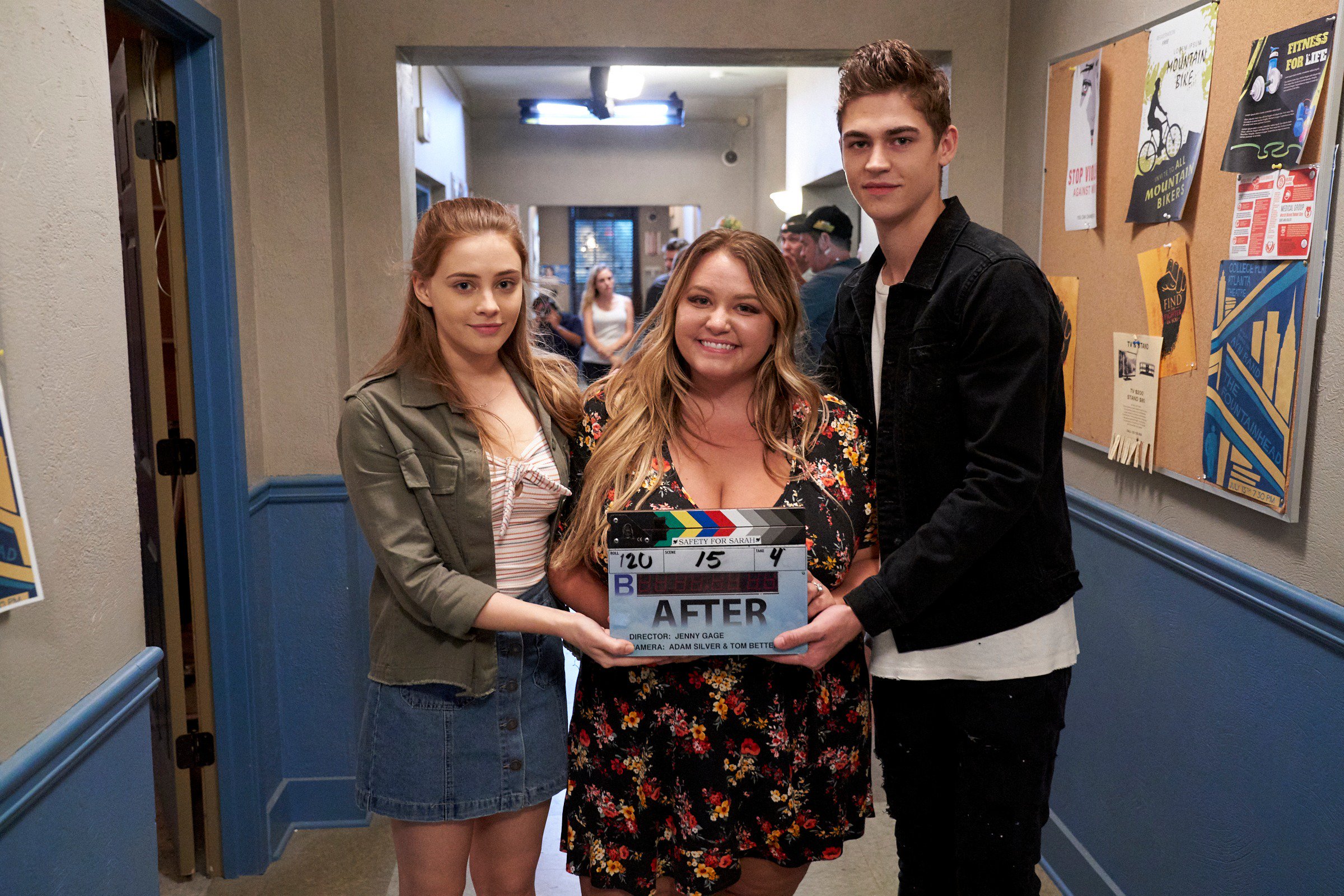 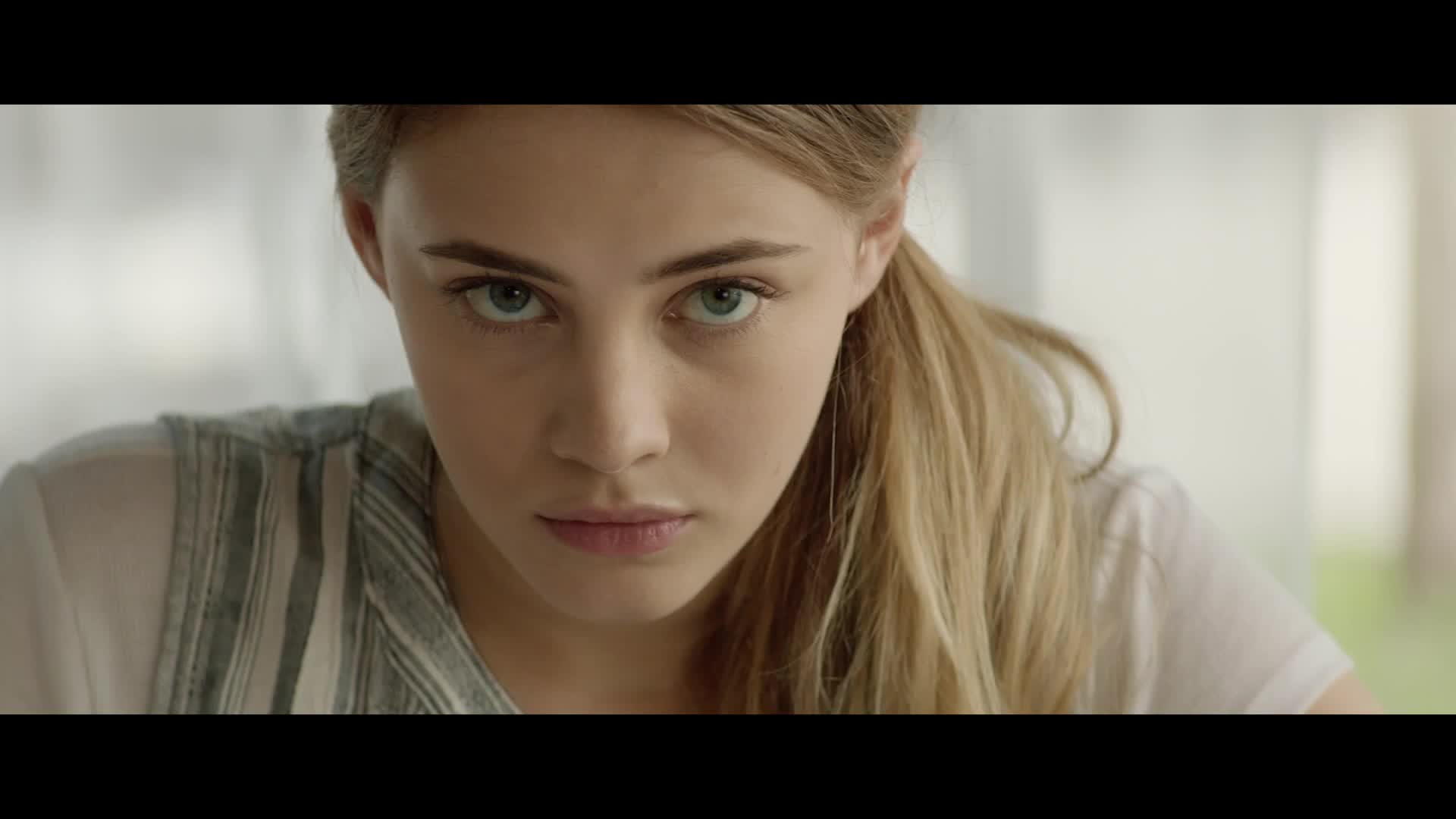 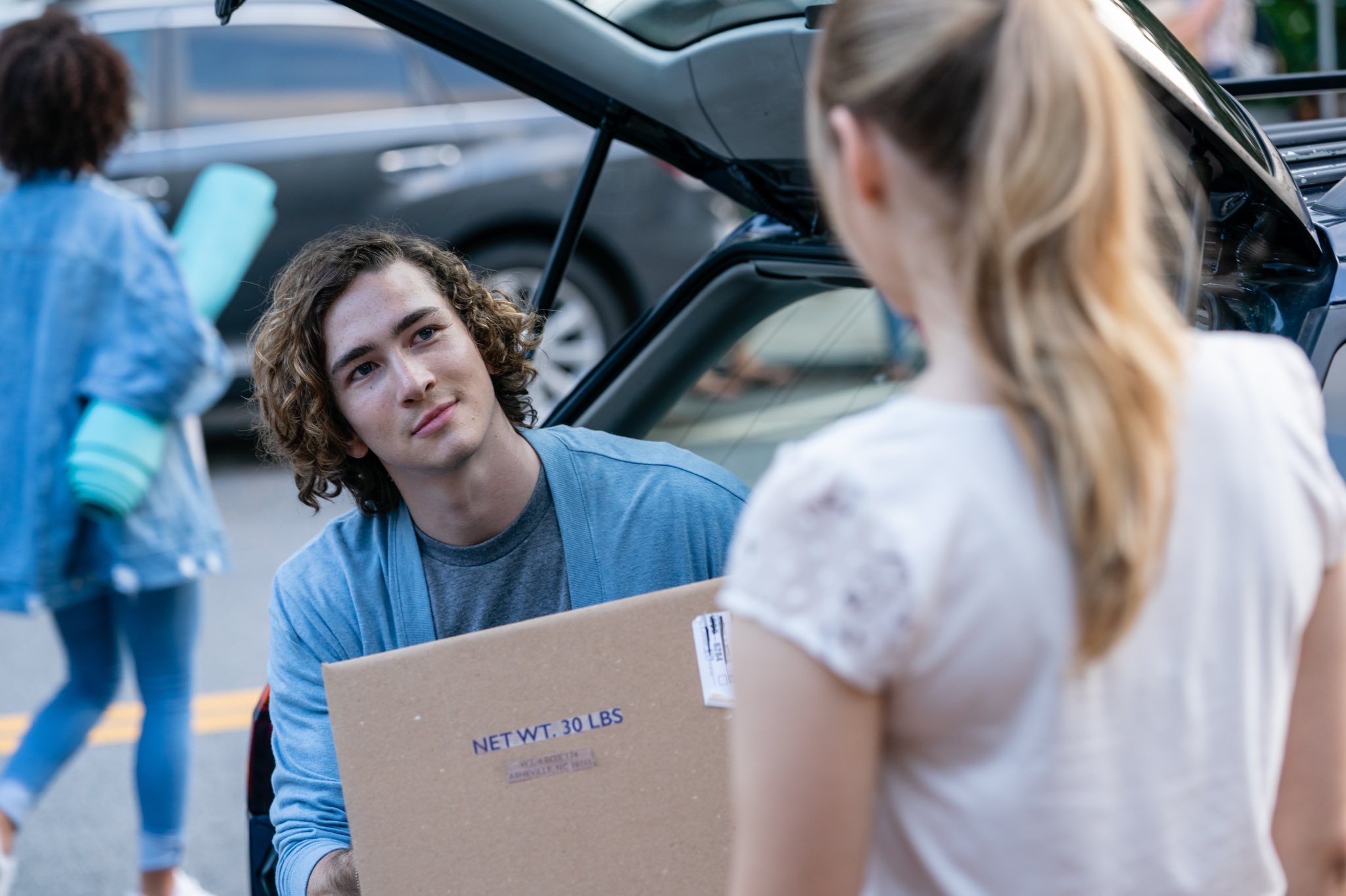 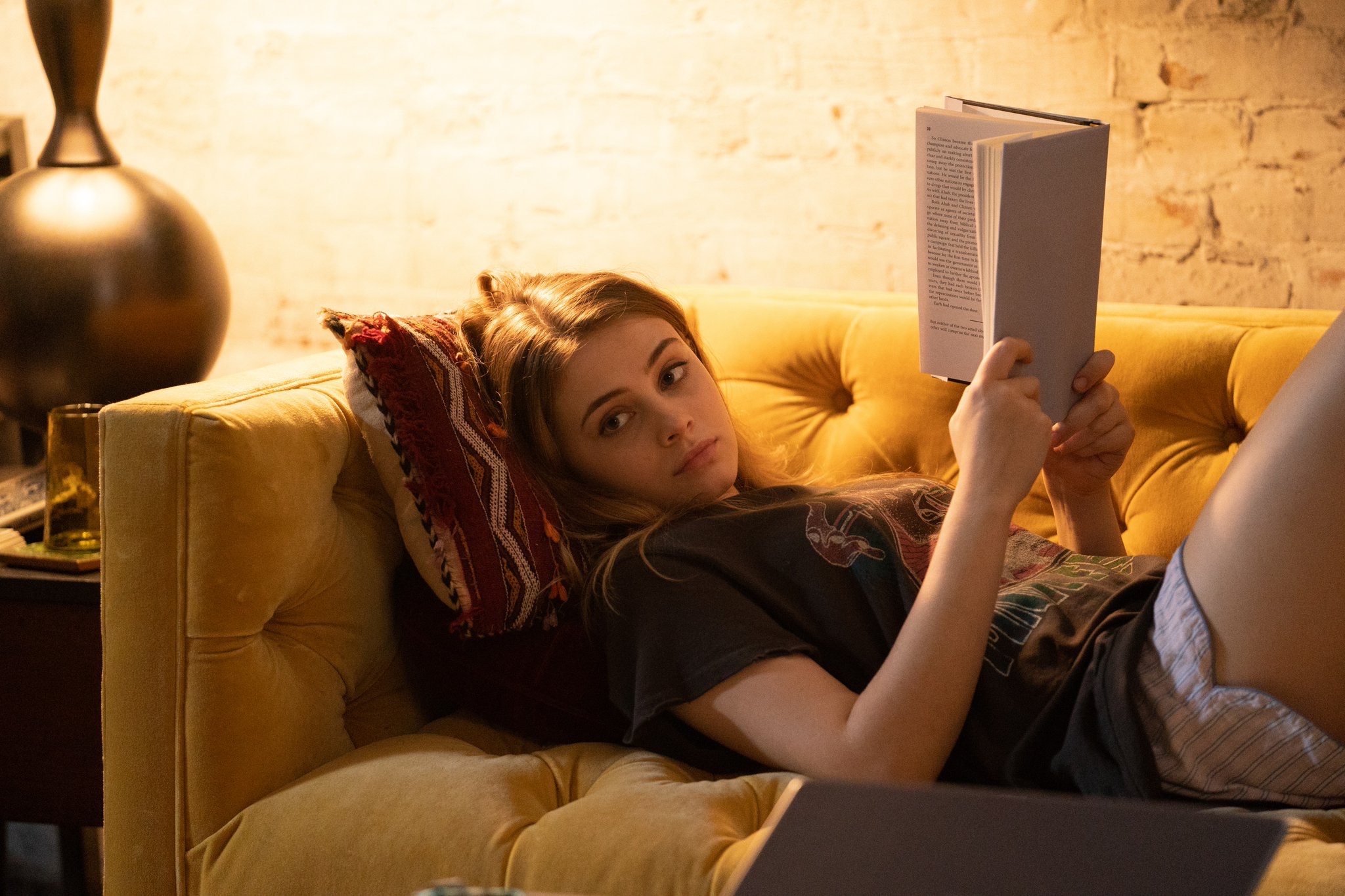 AFTER :: OFFICIAL TEASER TRAILER | In Theaters This April

AFTER follows Tessa (Josephine Langford), a dedicated student, dutiful daughter and loyal girlfriend to her high school sweetheart, as she enters her first semester in college. Armed with grand ambitions for her future, her guarded world opens up when she meets the dark and mysterious Hardin Scott (Hero Fiennes Tiffin), a magnetic, brooding rebel who makes her question all she thought she knew about herself and what she wants out of life. 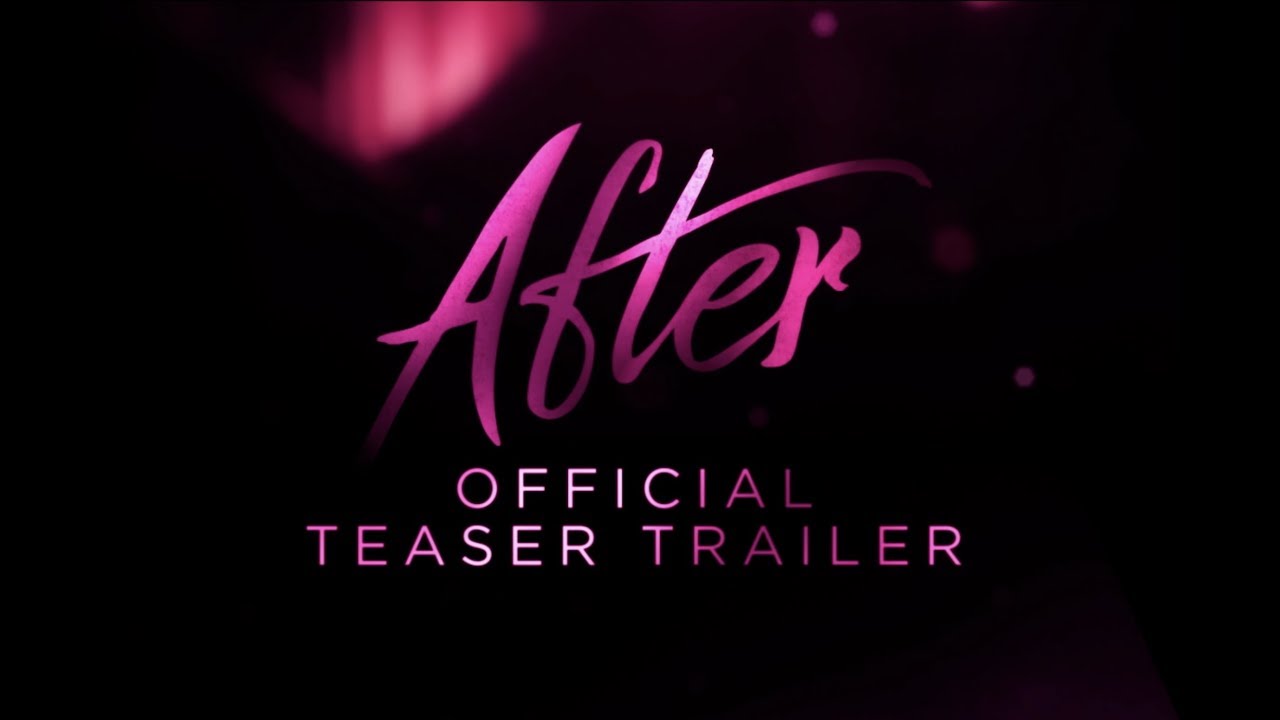